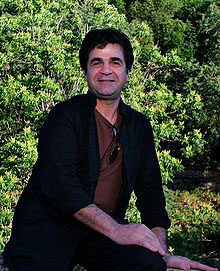 There was a conspicuous empty chair when the jury of the 61st Berlinale held its press conference on Thursday afternoon. Jury President Isabella Rossellini read a pronouncement that the empty chair was a symbolic gesture of support for Iranian director Jafar Panahi, who was invited to participate on the jury but was prevented from leaving his country. Panahi was sentenced last month to a six-year prison term and also received a ban from making movies for the next 20 years.

The show trial brought charges against Panahi, a long time human rights activist who had publicly denounced the policies of his government, for a trumped up charge of making a film without official government sanction. “This is an opportunity for us to take a strong  position on freedom of speech and the freedom of the work”, Rossellini declared. “If we were only allowed to make propaganda films approved by the state, it would kill the art. It is important that every voice be heard, every kind of film be made.”

Bollywood star Aamir Kahn, who is also serving on the jury, reiterated these thoughts adding that “it is a constant struggle and something trying to overcome every time censorship springs up.” He is joined by Canadian director Guy Maddin, British costume designer Sandy Powell, German actress Nina Hoss and Australian producer Jan Chapman as the jury that will determine the Festival’s Gold and Silver Bears. “We hope that our choices will be worthy of Panahi’s legacy”, Rossellini concluded.

The Festival is presenting a special showcase of Panahi’s works as an out-of-competition program, in order to keep Panahi’s profile strong in the minds of the assembled international professional and press communities and to the German public. Censure of the Iranian government has also been received from such noted names as Martin Scorsese and Steven Spielberg, among others. A worldwide human rights campaign to rescind the sentences for Panahi and his collaborators is picking up steam internationally as everyone awaits the next move from Iran’s government.