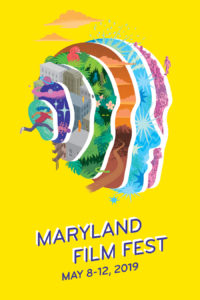 The Maryland Film Festival was founded in 1999 by Jed Dietz, who served as the annual event’s Director from then until 2018. He stepped down this past fall, handing the reigns to Interim Director Sandra L. Gibson, so the 2019 festival will be the first without him at the helm. Director of Programming Scott Braid returns, however, as do other staff members such as Events Manager Jessica Baroody. With over 80 short films and 40 features, the festival appears to be in as great shape as ever, still enjoying its lovely headquarters at the renovated Parkway Theater, located on the corner of Charles Street and North Avenue, in Baltimore. Check out the online film guide, with movies running from Wednesday, May 8, through Sunday, May 12, and get your tickets now, while they last. As a resident of the city, I can attest to the festival’s importance to our cultural life here. Come one, come all, for a cinematically great time.

So, what’s on this year? Quite a lot, and I have seen 7 of the feature-lengths, already, 6 of which I reviewed previously for Hammer to Nail (and I hyperlink to those reviews in the movies’ titles), where I am lead film critic. I present, below, brief capsule reviews of those 7 (condensed from my longer reviews) and mention a few others that I am excited to see for the first time. And let’s not forget about all the shorts! See you at the Parkway, as well as in the surrounding Station North Arts and Entertainment District and auditoriums of the Maryland Institute College of Art, where movies also play.Questions about how to get around and where to park? Check out the festival’s convenient visitors guide.

A solid history of the ten-year period when New York’s Bronx borough mostly burned to the ground, Decade of Fire is also a deeply personal documentary, narrated by someone who lived through the conflagration and has since devoted her life to rebuilding her community. We start in 1973, with images of apartment complexes ablaze, and on-screen stats informing us that over 80% of housing burned down at that time, leaving 250,000 people without homes. The narrative of the era placed guilt squarely on the shoulders of landlords and inhabitants, those doing it for the insurance and those doing it because they were hoodlums. Instead, as we learn, a toxic combination of financial mismanagement and subsequent desperation to cut costs led the New York Mayor’s Office to reduce resources – including firehouses – in the city’s poorest quarters. One think led to another, and eventually it was just easier to let the Bronx burn.

“Based on real events” reads an opening title card, but this is more an amalgam of the many such incidents of bored and frustrated women engaging in willful molestation and self-destruction than of any one story. An odd, twisted curveball of a movie, Frances Ferguson takes us to North Platte, Nebraska, for a Midwestern romp through twentysomething ennui. Frances – or Fran – is an unhappily married mother of one when we me meet her, about to throw the little she has in life away, and with a shrug rather than abandon. Her repellent husband masturbates in his car before coming home, in full view of anyone who cares to look, and the students she supervises as a substitute teacher barely notice her. But she, herself, notices one: the boy, a blonde vacancy on two legs whom she targets for an escapade. Now imagine the whole narrated by Nick Offerman (Hearts Beat Loud) in his usual ironic tones, and you’ll have a sense of the strange disconnect between subject and style. It’s a perfect mismatch and engaging in its peculiarity.

Luce (Julius Onah): the one film here that I have yet to review, as I just saw it at the 2019 Tribeca Film Festival

A riveting, complicated filmic essay on race, gender, colonialism, class, power and privilege (white and otherwise), Julius Onah’s Luce presents its deeply flawed characters as actors in a drama with predetermined rules against which they strain, often helplessly. Kelvin Harrison Jr. (Monsters and Men) plays the titular character, a young man adopted from war-torn Eritrea by white parents, played by Naomi Watts (While We’re Young) and Tim Roth (The Padre), who, now 17, has become the star of his high school, both academically and athletically. One teacher, however, played by Octavia Spencer (Hidden Figures), has her doubts about Luce’s perfection, and the questions (benevolent? you decide!) she raises unleash a series of consequences that will test all involved. What price an inspiring narrative? Is it worth it to raise up “one Obama” (as a classmates designates Luce) to cast off those who don’t measure up? Everyone here is a fully realized human being, which makes the movie, adapted from J.C. Lee’s eponymous play, so compelling, even as each person disappoints (as people are wont to do) in some way. Fortunately, the movie does not: Luce is first-rate cinema.

When filmmaker Hassan Fazili is targeted for execution by the Taliban after they dislike a previous film of his, he flees to Tajikistan with wife Fatima and young daughters Nargis and Zahra. After 14 months, their asylum applications to Western nations rejected, and facing deportation, they head back to Afghanistan, despite the danger, in order to regroup and take the illegal, smuggler’s route into Europe, in the hope that, once there, they will better be able to plead their case. And so, we follow along as they document, on three different iPhones, this new trip, over more than 600 days, all members of the family participating in the creative process. Beautiful and frightening, Midnight Traveler offers a profound exploration of the human condition in all its misery and glory.

Miles Davis: Birth of the Cool (Stanley Nelson): I saw at Full Frame 2019

Beyond the standard techniques of the nonfiction biopic – talking-head interviews, archival footage and stills, dramatized readings of the subject’s own words – Stanley Nelson (The Black Panthers: Vanguard of the Revolution) employs some vivid quick-cut montages to sell us on Jazz legend Miles Davis’ rapid rise to iconic status. Not only did he become, by the end of the 1940s and not yet 25, a sought-after trumpeter and composer, but soon thereafter, in the 1950s, a symbol of hipness that was both a source of pride for the American-American community and also a transcendence of racial barriers. Following Davis from birth to death, Nelson showcases his genius and talent, while also shedding light on his considerable demons.

One Man Dies a Million Times (Jessica Oreck): I saw at SXSW 2019

Over a million people died from the German siege of Leningrad during World War II, which ran from September 8, 1941, through January 27, 1944. To create a dramatic retelling of the event is to wade into a rich vein of tragedy and heroism, no additional cinematic tricks required. Along comes director Jessica Oreck (The Vanquishing of the Witch Baba Yaga), however, with ambitions beyond the ordinary, transposing the traumatic events of yesteryear from the past to the present. Her film One Man Dies a Million Times is set in modern-day St. Petersburg (Leningrad’s old and current name), though shot in black and white and narrated using text written during the siege. Time is malleable, the search for meaning eternal, and infinity born out of specificity. The result? A haunting meditation on the nature of humanity and how to survive our own downfall.

Gorgeously photographed throughout (by co-director Patrick Bresnan) and masterfully assembled (by the other co-director, Ivete Lucas), Pahokee both continues the long and respected tradition of cinéma vérité and offers tweaks on the format, as well, allowing the protagonists, all seniors at Pahokee High School in Palm Beach County, Florida, to comment on their own stories through cell-phone videos (confessionals of a sort), in which they express their hopes and dreams for tomorrow. Vibrant and hard-working, these kids hold much promise, both for themselves and their families, and for us. Pahokee is almost evenly divided between African-Americans and Latinos, who take great pride in their community, high school and high-school football team. Bresnan and Lucas, after years of making short films about the area, now bring us a feature-length documentary that chronicles the lives of four students as they contemplate the future. Compelling in its exploration of the stunning marvels of the seemingly mundane, Pahokee astonishes, one subtle dramatic turn after the other.

FILMS I HAVE NOT YET SEEN BUT AM EXCITED ABOUT 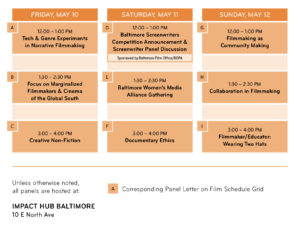 From Friday, May 10, through Sunday, May 12, the festival will put on a series of panels with attending filmmakers, organized by Filmmaker Conference and Panel Coordinator KJ Mohr, all at Impact Hub Baltimore (10 E. North Avenue), one of which I will moderate, on “Documentary Ethics” (Saturday at 3pm), featuring (as of this writing):

And that’s it for my preview. Enjoy the festival!