For the first time in memory (if my faulting memory serves me well and it increasingly does NOT), the New Directors New Films showcase opened last evening with a documenary feature. This annual rite of the Spring film season, co-presented by the Film Society of Lincoln Center and the Film Department of the Museum of Modern Art, was ushered in by BILL CUNNINGHAM NEW YORK, a fascinating look at the New York Times photographer and his love/hate obsession with the city he calls both his muse and his menace. Directed by Richard Press, the film is a fitting start to a festival that celebrates originality, imagination and daring.

Entering his ninth decade, Cunningham is a died-in-the-wool New York eccentric who still rides his Schwinn bicycle around Manhattan, capturing both “high” culture of New York’s fashion elite and the “low” culture of the city’s bohemian street fashionistas. In a rousing manner that reflects both the subject’s eclectic taste and the maddening mash-up of the city’s uptown and downtown scenes, the film not only offers a unique portrait of the artist as individual but also the environment he incessantly occupies.

New Directors New Films is dope for documentaries this year……a total of six feature documentaries are included, one-third of the overall program. It is a testament to the continuing renaissance of the non-fiction form that has been spreading across the globe these past two decades, bringing award-winning documentaries to local movie houses and to the attention of an ever-widening audience. 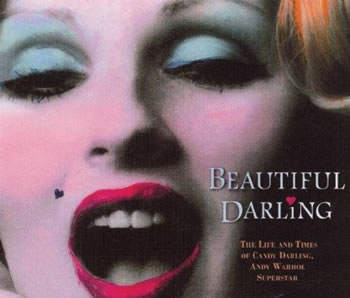 Another New York-centric documentary making its local premiere next week is the Berlin Film Festival sleeper BEAUTIFUL DARLING: THE LIFE AND TIMES OF CANDY DARLING, ANDY WARHOL SUPERSTAR (the title explains it all, dahling). For those who may have forgotten or who never did know, the personalities who were attracted to the flame that was Andy Warhol were a memorable collection of misfits, miscreants and misfires. But none had the innate glamour and Monroe-like vulnerability of Candy Darling, a star of the Warhol film oeuvre and a classy downtown diva.

Born James Slattery in Massapequa, Long Island, in 1944, Candy Darling transformed herself from his/her dull suburban roots into a provocative drag du jour in a stunning act of self-creation. But like her apparent idols Monroe and Harlow, her flame was not to last. She died at age 30, forever frozen in our memories as a captivating blond with a lilting voice and charisma to spare. Using vintage footage and interviews with such singular superstars as Jackie Curtis, Holly Woodlawn and Penny Arcade, director James Rasin recreates the allure of the Warhol Factory and its dreamy denizens.

On a far more serious note, the documentary LAST TRAIN HOME, the major prize winner at this year’s International Documentary Film Festival Amsterdam, is a chilling account of Chinese displacement and the grinding bureaucracy that lurks beneath the economic miracle. Each year, hundreds of millions of migrant workers take to the crumbling Chinese railway system in a mad dash to spend the Chinese New Year in their native villages. It is the largest migration of people on the planet, often involving traveling for days in cramped and uncomfortable conditions. Director Lixin Fan aims his camera and his eagle eye on one couple, the Zhangs, who are making the long and crowded journey to their rural village. They left the economically depression region sixteen years earlier, in a quest for a better life for themselves and the family (daughter and parents) who they left behind. But after such a long seperation, the tension is very high and the recriminations are ugly as their now-teenage rebellious daughter and her grandparents receive them with animosity, suspicion and a lot of pain.

In MY PERESTROIKA, a US/UK co-production by Robin Hessman, the history of the Soviet Union is reflected in the tense and often unhappy lives of the Russians who lived through historic world events. By profiling the lives of former schoolmates (two teachers, a businessman, a single mother and a once-famous musician), the film posits the question of what does it mean to be a Russian today, after all the changes in their society and position as a world power. The “brave new world” may not be an easy one, but by using their stories, the filmmakers attempt to reveal how far the country has come and the challenges that still await as it attempts to redefine itself for a new millenium.

With the Oscar success of THE HURT LOCKER, it may be time for films on the “war on terror” to shed their supposed box office curse and provide us with the information we need in order to deal forthrightly with the past and expansively in the future. In THE OATH, director Laura Poitras offers us two distinct personality portraits of our age. Filmed over a two-year period,the film interweaves the stories of Abu Jandal, Osama bin Laden’s former bodyguard (currently a cab driver in Yemen) and Salim Hamdan, a Guantanamo Bay prisoner charged with war crimes. The fates of both reveal the chaotic strategy of the fight against Al Qaeda whose shameful legacy continues to unfold with more details about U.S. interrogation methods and wobbly intelligence. This is hard, unflinching filmmaking that inspires a wake-up call that our government has not yet heeded.

Another international hotspot, North Korea, is the subject of THE RED CHAPEL, a funny, maddening and frightening documentary about the closed society that may be our greatest international threat after all. Danish director Mads Brugger, a cross between Michael Moore and Borat,  travels to Pyongyang on a feigned mission of cultural exchange, bringing a camera crew and the Danish-Korean slapstick-comedy team Red Chapel. The mix of comedy and repression offers some big laughs but ultimately the sheer sadness of the place makes joking almost obscene and largely irrelevant. While Brugger’s stunt is lively as political theater, the stakes for those living under such a system are more dire than we may want to know.

For more information on these and other films in the New Directors New Films program, visit: www.newdirectors.org