This year’s Tribeca Film Festival, which is currently in the middle of its 12 day run in New York City, boasts a strong representation of both veteran and emerging European talents. As a whole, the Festival offers a tantalizing check of the pulse of current trends and styles in European filmmaking. How these films will fare in the US market is far from certain, but for the next week, European cinema rules in downtown New York. 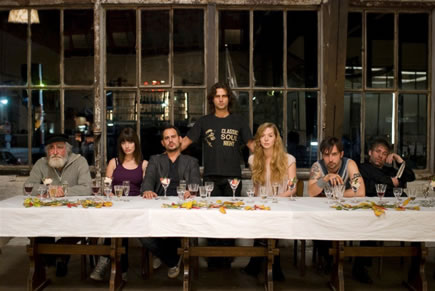 The narratives on display from European talents take in all genres and filmic styles. Making its world premiere debut at the Festival, the UK drama BRILLIANTLOVE takes place over a sweltering summer, as a novice photographer documents his sweaty affair with his taxidermist girlfriend. Director Ashley Horner finds a realistic yet poetic tempo to describe their affair and the pressures that ensue when the photog becomes celebrated in the local art scene.

In BURIED LAND, a co-production between the US and Bosnia Herzegovina, co-directors Geoffrey Alan Rhodes and Steven Eastwood unfold an existential flair mixing fiction and mockumentary in the storry of a small town that is discovered to have an underground valley of ancient pyramids that predate Egypt. The clash of cultures between the aggressive US crew and the world weary Bosnians is one of the film’s many delights.

THE CHAMELEON, directed by French debut director Jean-Paul Solome (an auteur name if I ever heard one), is an unsettling psychological thriller about a missing teenager who resurfaces after being presumed kidnapped and a local FBI agent’s campaign to prove he is an imposter. Ellen Barkin, not seen on screens of late, gives a scathing performance as the mother who wants to believe and yet has her doubts. She is matched by the willowy Famke Janssen, giving the FBI agent a fire and compulsion.

A kidnapping is also the core of the UK drama THE DISAPPEARANCE OF ALICE CREED by writer/director J Blakeson. When two men kidnap the daughter of a millionaire and keep her at a fortified location, things do not go exactly as planned. The girl refuses to play the victim and in facts turns the tables on her tormentors. This stylish thriller is making its world premiere debut at the Festival this week.

The mood is decidedly more frothy in the French biopic GAINSBOURG, JE T’AIME….MOI NON PLUS by writer/director Joann Starr. Actor Eric Elmosnino uncannily resuscitates the insouciant energy of singer/composer Serge Gainsbourg, a 1960s pop icon and notorious lady’s man (with Brigitte Bardot and Jane Birkin among his lovers). The influential stylist’s personal story, beginning with his life in Nazi occupied Paris and his wild lifestyle at the center of swinging Sixties pop culture, is an entertaining romp while also examining the essence of the lost art of personal style.

In a more contemporary French mode, hot screen actors Romain Duris, Julie Ferrier and Vanessa Paradis bring the necessary heat to HEARTBREAKER, a new film by Pascal Chaumeil. Duris and Ferrier play a brother and sister who break up couples for  a living. However, in one difficult assignment, both heartbreakers get their own hearts broken in what is a series of unexpected and illuminating events. This is yet another charming romantic comedy from the people who seem to have invented love in the first place.

What if you were an Arab, comfortable in  your Islamic skin, and in one day not only do you discover that you were adopted but that you were born Jewish? Well, that is the calamity that befalls Mahmud (winningly played by comedian Omid Djalilli) in the very smart and very funny THE INFIDEL, directed by UK director Josh Appiganesi. As Mahumud (nee Solly) discovers his Jewish roots with the aid of a grouchy Jewish taxi driver (played by the WEST WING’s Richard Schiff, the film has much to say about identity politics and how loyalties stack up in a world that more often divides than unites.

British-Nigerian director Thomas Ikimi builds considerable suspense in the psychological thriller LEGACY. The story centers on a soldier who participated in a botched terrorist related mission in Eastern Europe. The psychological underpinnings of the character, strongly played by Idris Elba of the television series THE WIRE, details a man’s attempt at personal salvation amidst the hypocrisy and crushing bureaucracy of the war machine.

A much lighter tone occurs in Turkish-Italian director Fezan Ozpetek’s family comedy LOOSE CANNONS, a hit at the recent Berlin Film Festival. A patriarchal Italian family that has been in the pasta business for generations is upended by news that both the prodigal sons are gay. A witty roundelay of sex, comedy and clashing values marks this entertaining film from one of Europe’s most intriguing directors.

The future is not nearly so bright in the Orwellian drama METROPIA, a Swedish/Danish/Norwegian co-production by Swedish director Tarik Saleh. In the not so distant future, Europe is connected via a series of underground railways and is united by a Big Brother like governmental body. When the cogs in the wheel begin to revolt, the strong arm of the government comes down hard. Actors as diverse as Juliette Lewis, Udo Kier and Stellan Skarsgaard give voice to this computer generated reflection on the “worst that could happen” theme.

Jean-Pierre Jeunet, the hyper-imaginative director behind such films as DELICATESSEN and AMELIE, is bringing his latest work MICMACS to Tribeca this week. In a whimsical tale of underdogs, the film focuses on Bazil, a gentle man with a bullet lodged in his brain and his misfit pals who devise a plot to lay low a giant weapons manufacturer. The stunning visuals and the restrained comedic style make this one of the more interesting entries in this year’s Festival lineup.

From Ireland, which has been experiencing a mini-renaissance of late, several impressive films are on display.  In MY BROTHERS, directed by Paul Fraser, two brothers hijack a bread van for a road trip across country that becomes an emotional odyssey. In a stellar directorial debut, Paul Fraser, a protégé of Shane Meadows, shares with his mentor a love of the working class and a studied look at the disparities that still exist between the classes. Academy Award winning writer/director Neil Jordan (THE CRYING GAME) weaves a cinematic fairy tale in the lovely ONDINE, starring Colin Farrell as a lonely fisherman who one day pull in a mermaid-like beauty. Is this real, a fable or just a lonely man’s fantasy? The director never points in any one direction which makes this lovely romantic tale an odd balancing act between lilting fantasy and harsh reality.

Ireland is on a roll with the inclusion of SNAP, a gripping psychological drama about three generations of a family who create harm and imbalance for one another. Director Carmel Winters brings a terrific ensemble cast, headed by Aisling O’Sullivan’s calloused matriarch, into sharp focus in this emotional rollercoaster of a drama. In ZONAD, directed by John and Kieran Carney, (whose ONCE was an Oscar winning arthouse hit), the setting is a small Irish town in the 1950s. When a brutish thug, dressed as an alien, arrives, it throws the small town’s equilibrium into disarray.

The Belgians have always had a soft spot for coming-of-age stories, so the latest in this series is another gem. MY QUEEN KARO, directed by Dorothee van den Berghee, is anchored by a 10 year old girl who moves with her parents to a carefree squatter’s commune in 1970s Amsterdam. Human emotions, sexual tension and childhood awareness clash as the ideals of the commune are challenged by forces of control, selfishness and the messiness of human emotions.

The fine line between fantasy and reality, complete with a punk rock score, is at the core of SEX & DRUGS & ROCK & ROLL, which also makes its world premiere debut at Tribeca this week. The films paints a stylized portrait of British punk pioneer Ian Dury (with a standout performance by Andy Serkis), a physically deformed yet imaginative genius, as he juggles the demands of career, relationships and fatherhood. Mat Whitecross, who has collaborated on the films of Michael Winterbottom, makes his directorial debut here, with fine performances and a lilting nostalgia for 1970s London.

Ensemble acting is also the hallmark of SOUL KITCHEN, the latest film from Turkish/German director Fatih Akin. The setting is a Berlin restaurant, where the hapless owner has to juggle the demands and emotional needs of his employees and customers. Akin once again makes a statement about the new cross-cultural Europe, where traditions from different backgrounds crash and collide but finally find some kind of synthesis.

A second film from Germany also explores the tensions between local Turks and Germans. In WHEN WE LEAVE, a young Turkish-German woman flees Istanbul with her young son after suffering abuse from her husband. When they move back in with their family in Berlin, old wounds and emotional scars are revealed.

For more information on these films and even some you can watch online, visit: www.tribecafilm.com