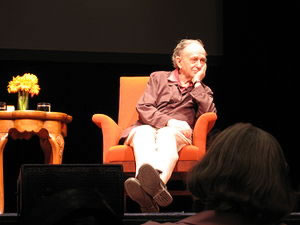 Veteran documentary filmmaker Frederick Wiseman was honored at IDFA’s Opening Night ceremonies last evening with a Living Legends Award. There is much truth in the name of the award……Wiseman is a true living legend who continues his 50-year streak of creating intriguing, involving and sometimes shocking documentaries at the tender age of 79. He shows no signs of slowing down. His lastest project, LA DANSE, a portrait of the Ballet Company of the French National Opera.

Frederick Wiseman was born in Boston in 1930 into a Jewish immigrant family. He came to documentary filmmaking after being trained as a lawyer. After producing various short films, he took the production reins for THE COOL WORLD in 1963, an influential underground film of the period. His first solo directorial credit came in 1967 with TITICUT FOLLIES, an unsparing look at a mental institution. The film, shot in cinema verite style without voiceover narration, was very controversial and was banned in many states for decades.

But with this film, Wiseman had found the oeuvre that he would continue to explore throughout his career. He is fond of looking at the institutions that frame our lives and offering a highly realistic (and yet poetic) look at the human dimensions within them. In such films as HIGH SCHOOL (1968), LAW AND ORDER (1969), HOSPITAL (1970), BASIC TRAINING (1971), JUVENILE COURT (1973), WELFARE (1975), MEAT (1976), MODEL (1980), DEAF (1986), BLIND (1987), ZOO (1993), PUBLIC HOUSING (1997), DOMESTIC VIOLENCE (2001) and STATE LEGISLATURE (2006), he trained the camera eye on the push-and-pull of human interaction, giving the viewer an internalized experience of worlds they barely knew. Most of the above were produced by and for U.S. Public Television and have attracted wide audiences and even influenced public policies.

Wiseman’s style has been referred to as “observational” with connection to the direct cinema movement of the 1960s, exemplified by his fellow documentarians The Maysles and D.A. Pennebaker. However, in interviews he has dismissed the idea of objectivity and stressed his role as the organizer of impressions and reactions. “What I try to do is edit the films so that they will have a dramatic structure, that is why I object to some extent to the term observational cinema or cinema verité, because observational cinema to me connotes just hanging around with one thing being as valuable as another and that is not true. At least that is not true for me and cinema verité is just a pompous French term that has absolutely no meaning as far as I’m concerned.”

Wiseman has been an innovator in terms of the distribution of his films. His film distribution company Zipporah Films, Inc. owns all rights to his films and actively sells them on DVD and to international markets (website: www.zipporah.com). In this respect, and in many others, he is a role model for generations of documentary filmmakers and a true living legend.