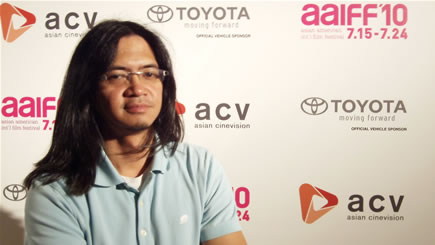 Gerry Balasta’s “Mountain Thief” wins the hearts of Asian Americans in NYC at the recently concluded 33rd Asian American International Film Festival 2010 last July 19, 2010. The director was almost teary eyed thanking a fully packed sold out crowd and said, ” This screening was meaningful because this was his hometown crowd. It was his mother Nina Balasta’s (co-producer of the films ) first time to watch the film with a live audience.” It must have been an electrifying experience for Gerry and his Mom as the crowd lauded the film both by their thunderous applause and their compliments during the Question and Answer portion at the end of the screening.

As of now “Mountain Thief” is in its Festival Circuit travelling to 7 film festivals from Spain to LA, CA and bagging the Special Jury Award at the San Francisco Asian International Film Festival. It has been a long journey for Gerry as he started actually doing acting workshops at the Payatas Dump site to audition his possible actors in 2004. Three years hence the filmmaking commenced. He used real scavengers from the garbage collecting town of Promised Land, Payatas in the Philippines as actors of the film. This place is a stenchy monstrous mountain of trash where people await for new trash to be dumped for them to collect scrap metal, empty cans and bottles to be sold for recycling. Each of them living at the site and some of them even…. just die there.

The triumph of the film included: three aspects: the truthful acting, the story telling and direction. My favorite characters were the father and son tandem of Julio, the bagong salta ( or new comer ) and his son Ingo who inspite of being partially blind and suffering hydrocephalus was the most positive minded amongst all characters. Ingo enjoyed his partial view of the Mountain site, he sees it as a playground, where he can play freely with friends and roam around, in contrast to the war stricken Mindanao where they came from. Julio, is a hard working chap who eventually everyone began to love and admire. The relationship between the father and son were the symbolism of true faith and hope. I was inspired with their optimism. I was touched when thinking that these actors are real and really live this life. The storytelling style and direction was unique as in each scene in the film was stylistically presented as present, flashback and forshadowing seeing the situations in different perspectives from the different charcters experiencing the moment. It created suspense and mystery to the non linear format of the film. Balasta captured the faith, hope and despair of the humanity that lives in a sub human situation. The most important point of view shown in the film is of the town thief, Simon, who most of the time is the eye witness to the madness of the community. He sees life in the haze of drugs and pangs of hunger. This thief at the end is the only reliable historian who can say the truth. Who will listen to him?

Why people stay, live and die at a dumpsite called Promised Land baffles me. But watching the film, I was reminded that these people exist and it is the truth. The ala Lino Brocka style of Gerry Balasta’s presentation of Social Realism in Filipino hit a point. Poverty in the Philippines is in existence and no one is doing about it. The film concludes with Gerry’s attempt to help the 20 scavengers employed as actors in the film. He paid them for their day’s work. He sent the children to be medically cured. He says, the work has just began. After his festival run this year, he hopes to do a special screening for all actors involved to have their own special day. As we enjoyed the film, cried and lauded the filmmaker, one must think of what we can do for the people at the dumpsite. What can we do about poverty in the Philippines? The film made us think, the film made us ponder, and I hope the film will make us act – to help. To see how you can help: contact: Gerry Balasta email: inspirechanges@yahoo.com website: www.mountainthief.com