At a typically informal gathering at the Festival’s resident club on Wednesday evening, the jurors in various categories in the IDFA Awards competitions announced the three-film nominees before a packed house of anxious filmmakers and guests. The Awards themselves will be annnounced on Friday afternoon at the official awards ceremony held at the art nouveau palace, the Tuschinksi. Film screenings of the winners and other titles continues through Sunday.

The winner of this competition receives the VPRO IDFA Award for Best Feature-Length Documentary (€ 12,500). 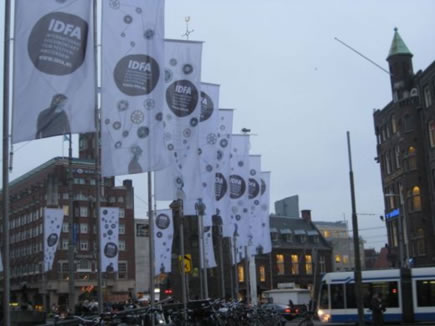 IDFA Competition for Dutch Documentary
For the first time, all Dutch premières, both the documentaries included in the Premieres from the Lowlands section and in other competition programmes, compete for the IDFA Award for Dutch Documentary (€ 5,000, made available by the Dioraphte Foundation). The nominees are: Farewell by Ditteke Mensink, The Player by John Appel and The Rainbow Warriors of Waiheke Island by Suzanne Raes.

DOC U! Award
A jury of youngsters between the ages of 15 and 18 years old will choose the best film from the DOC U! programme, selected from the IDFA programme. Nominations for  IDFA DOC U! Award (€ 1,500) are: Crips Strapped ‘n Strong by Mags Gavan and Joost van der Valk, Soundtrack for a Revolution by Bill Guttentag and Dan Sturman, and The Yes Men Fix the World by Andy Bichlbaum and Mike Bonanno.