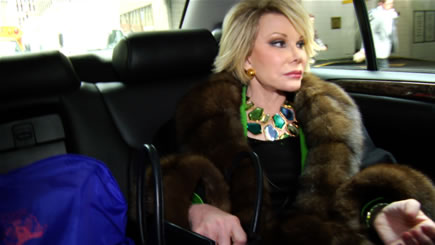 New York, NY (February 4, 2010) – IFC Films, the leading American distributor of independent and foreign films, announced today it is acquiring North American distribution rights to the award-winning documentary JOAN RIVERS: A PIECE OF WORK.  Directed by Ricki Stern and Annie Sundberg, JOAN RIVERS: A PIECE OF WORK is an exposé chronicling the private dramas of irreverent, legendary comedian and pop icon Joan Rivers as she fights tooth and nail to keep her American dream alive.   The film premiered last week in competition at the Sundance Film Festival to great critical and audience acclaim, receiving the U.S. Documentary Editing Award.  Seth Keal produced with Stern and Sundberg. The film was shot by Charles Miller and edited by Penelope Falk.

The deal for JOAN RIVERS: A PIECE OF WORK was negotiated by Arianna Bocco from IFC Films with Josh Braun and Jason Janego of Submarine Entertainment.   IFC Films will release the film in 2010 in theaters across America.

JOAN RIVERS: A PIECE OF WORK takes the audience on a year long ride with Joan Rivers in her 76th year of life; it peels away the mask of an iconic comedian, laying bare both the struggle and thrill of living life as a groundbreaking female performer. Filmmakers Ricki Stern and Annie Sundberg expose the private dramas of this irreverent, legendary comedian as she fights to keep her career thriving in a business driven by youth and beauty.

Jonathan Sehring, President of IFC Entertainment said, “”Our entire team fell head over heels in love with JOAN RIVERS: A PIECE OF WORK.  Easily one of the most truthful and ultimately inspiring films about show business ever made not to mention the funniest.  Ricki Stern and Annie Sundberg have made one of the year’s great documentaries and a portrait of a fearless, trail blazing comedian.  We’re absolutely thrilled to be working with them to get this film out to a huge audience.”

Ricki Stern and Annie Sundberg said, “It”s been a wonderful, crazy ride with Joan and it looks like we’re in for more fun. We’re very excited to be working closely with IFC Films to bring the film to theaters across the country so her audiences – old and new – can experience Joan’s hilarious and inspiring story.”

Joan Rivers said, “It was an incredible and joyous experience and I’m proud to be a part of something so honest and amazingly produced. Now, show me the money!”

Ricki Stern and Annie Sundberg, Emmy nominated for their work as co-directors and co-producers of films including the 2007 Sundance Film Festival favorit documentary The Devil Came On Horseback (2007) which was nominated for 3 Emmys including best Documentary.  Stern and Sundberg also co-directed and co-produced the Emmy nominated documentary The Trials of Darryl Hunt (2006 Sundance Film Festival) for which they are recipients of the Dupont-Columbia Award for Excellence in Journalism.  The Trials of Darryl Hunt was short-listed for the 2007 Academy Awards for Best Documentary Feature, and was a 2007 Independent Spirit Award nominee for Best Documentary.  The film won awards at more than thirty festivals, and premiered on HBO in spring 2007, with theatrical release (ThinkFilm) in summer 2007.  They are currently in post-production on Burma Soldier for HBO, about a former junta member who risks everything to become a pro democracy activist.  Stern and Sundberg co-directed and co-produced The End Of America (2008) made in collaboration with best-selling author Naomi Wolf (The Beauty Myth); the film makes a chilling case for constitutional protections as it puts the recent gradual loss of civil liberties in the US in a historical context.  The film premiered at The 2008 Hamptons Film Festival.

A leader in the independent film industry, IFC Entertainment consists of multiple brands that are devoted to bringing the best of specialty films to the largest possible audience: IFC Films, IFC Festival Direct, IFC Productions and the IFC Center. IFC Films is a leading U.S. distributor of independent and foreign films with a unique day and date distribution model, ‘IFC In Theaters,’ that makes films available to a national audience by releasing them simultaneously in theaters as well as on cable’s On Demand platform, reaching 50 million homes.  ‘IFC In Theaters’ is available nationwide in standard definition and also offered in high definition on Cablevision and Comcast.  IFC Festival Direct features a wide selection of titles acquired from major international film festivals and initially offers them exclusively through On Demand.  IFC Productions is a feature film production company that provides financing for select independent film projects.  IFC Center is a five screen, state-of-the-art cinema with luxurious seating and HD digital and 35mm projection that shows art-house films in the heart of New York’s Greenwich Village.  IFC Entertainment’s companies are subsidiaries of Rainbow Media Holdings LLC.