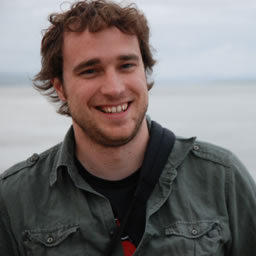 Quebec City-based filmmakers Henry Bernadet and Myriam Verreault have known each other since high school, so after making a series of short films, they decided that their first feature project together would be a film that took a realistic look at the lives of teenagers who attended the very same high school in the suburbs that they graduated from ten years ago. WEST OF PLUTO is a semi-documentary that focuses on a group of young teenagers who bond, bicker and flirt with each other, while they grope for meaning in a world defined by the values of their parents.

“The film is definitely a fiction film, but has strong documentary elements”, Bernadet explained in an interview published in the FESTROIA Festival Dailies. “We made the movie with non-professional actors who are reel teenagers. We wanted to get away from what we see on television and in the cinema, where 26 year old professionals play teenagers. By working with real teenagers and using much of their dialogue and slang in our screenplay, the result was hyperrealist, close to cinema verite.”

When asked about the origins of the film’s title, Bernadet explained that “one of our characters gets really angry that Pluto is not a planet anymore, so there is a parallel between adolescence and the case of Pluto, a distant planet whose identity is out of focus.

When you are a teenager, you are looking for your own identity, struggling to find your own way, to confront your own opinions.”

Films from Quebec have been quite strongly received in recent years. When asked to explain why Quebec cinema has been on the rise of late, Bernadet offered that “this has been a very rich period because there was a democratization of this media and with it came a movement called Kino, which started in Montreal and gathered local filmmakers to screen one another’s films every month. Local filmmakers typically work on one another’s projects and this stimulates the development of filmmaking in a city which is culturally very rich. And of course, we have local support organizations like SODEC that provide subsidies and strategic help to get films made, promoted and sold overseas.”

The film has been making the rounds of the film festival circuit, with prominent premieres in Montreal, Los Angeles and now FESTROIA. “Right now my partner Myriam is at a film festival in Denmark, while I am here in Portugal”, Bernadet exclaimed. “We have been in The Netherlands, Belgium, Germany and other places to come. It’s been great!”