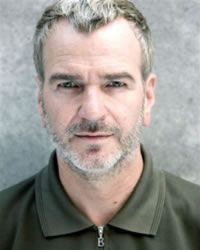 Wieland serves as the Director of the Panorama section and the Teddy Awards.

He has worked at the berlinale for 30 years as a programmer, was appointed head of Panorama in 1993 and has managed the Teddy awards ever since. His first film was shown at the berlinale in 1981.

Wieland has lived in Berlin since 1982. He studied drama, literature and ethnology and worked on numerous video and film projects with an early focus on the men’s movement and homosexual identity. Among other relevant biographical entries are, managing an independent art house cinema; studies at the San Francisco Art Institute; and positions in several film institutions. As a director, actor , writer or editor he has been identified with acclaimed television and film productions, including , but not restricted to, Die Erika and Klaus Mann Story (Escape to Life), Among Men, Zimmer 303, Die Wahre Geschichte von Maennern und Frauen (The True Story about Men and Women), Die Venusfalle (The Venus Trap), and Westler ( East of the Wall).

The berlinale was the first A type international film festival with official awards , the TEDDY , for the best lesbian, gay, bi- and transsexual films. This award is the most important global award for queer films and has been granted for the last twenty four years. Modern film history could not be written without paying tribute to those honored with the TEDDY, including to date Pedro Almovar, Gus Van Sant, Derek Jarman, Todd Haynes , Helmut Berger and Tilda Swinton to name but a few.

Claus Mueller: What are the most important changes compared to last year?

Wieland Speck: Because of the berlinale 60th birthday we included several films from past years, a return to history which is also part of the zeitgeist, a fruitful coincidence. We had numerous fiction and documentary films dealing with the past, yet not in a nostalgic or indulgent perspective. Rather we start [in these productions] with the present. And now in the present there is a sense of discomfort and this discomfort arises not from the present being so bad but more from a sense that we do not know what will happen tomorrow, from our uncertainty about the future. Thus the fear of the future brings people to look into the past more creatively and ‘pulling up the carpet’

CM: Does this dynamic also hold for the TEDDY selections.

WS: I see this tendency in all kind of films. I just discussed CUCHILLO DE PALO (Renate Costa} from Paraguay [searching for tracers of an uncle’s life] which reflects perfectly this perspective.

CM: What about new discoveries?

WS: Actually his was the year of discoveries, there were less ‘stars’ one knows, and a certain mediocrity of films noted in earlier years was missing. There is greater bravery in film making, also among American Independents, content to chew on which motivates us, and there were many post screening discussion which reflected this vivid year. In our program there are 18 first [time film maker] films, not that we looked for such films, but it turned out that way. There are also film makers who have been with us for a long time and who have come back with interesting subject matters.

CM: Let me go back to a question which we discussed earlier and also considered by major film festival directors I spoke to. Low cost production and post production technologies generate each year a greater number of film productions but there seems to be no parallel increase in high quality films. What is your take on that issue?

CM: How many films were actually submitted to Panorama?

WS: A little bit over 3000, the total number for the berlinale, including shorts, exceeded 6000 and that is growing each year

CM: Sundance sales seem to show that there is an increased demand for low cost productions. Are there similar tendencies in Berlin?

WS: Well if you look at the European Film Market, there are fewer buyers going for medium budget films [($10-$50 million range] and more for low budget films. In the berlinale programs we have also a larger proportion of small films. From the perspective of the berlinale as a cultural event, this is a good tendency.

CM: Do you agree with Geoff Gilmores observation that [in our weichei – soft headed Society] there seems to be a decline of creative content? Note that one of India’s most prominent media executives, Uday Kumar, the chief of Reliance MediaWorks North American operations, does not believe that India has that problem.

WS: First it is not the question of the absence of talents which are always there. It is more the question of what is supported. In the private and in the public [sponsoring] sectors you have people all over who must profile themselves and who act as if they know what is really good within a quasi democratic process that is really not democratic. This results in whatever is radical to be pushed to the middle. Thus it is not the question of [the quality] of what someone has written rather how external people who sponsor perceive of it.

CM: Is that part of the prevailing spirit? It reminds me of a statement of Michael Jay Solon more than 20 years ago identifying the absence of original concepts as the principal problem of the commercial film industry.

WS: Well it is a bit difficult. In principle we live in the age of plagiarism, quoting constantly other sources and experiences and

CM: float on the surface with second-hand experience. We receive copies of copies and observe the decline of authenticity and real life experiences.

WS: Yet the reaction to this second hand [commercial] story and film telling is the enormous and unexpected success documentaries have today. And it would be great if Americans could develop more interesting forms from documentary story telling away from the mélange of multiple layers of music and talking and the rapid cutting which no one wants to see and is better suited for television. We have several here because of their content and the berlinale birthday celebration, yet that mode of documentary film making is dead.

It is the zeitgeist which puts the opportunists in front row and they are shitting in their pants while performing as cool individualists. It is not the absence of creative content which makes our times dull. Creative content is always there and it is our job to bring it to the foreground even it is against what the zeitgeist demands.

CM: This also applies also to independent as distinct from commercial productions?

CM: We have the emergence of new technologies such as 3D and its likely rapid spread (e.g., via 2D to 3D conversion) not to speak of Japanese patents on smelling what we see, sort of an electronic polyester or odorama. Will this close to complete representation of reality lead to a greater audience addiction to the visual medium?

WS: This will all just be fun, soon forgotten again and reinvented in due time…. Sort of Luna Park pacing…. And the impact of these new technologies on independent film making will be marginal.

CM: On that note, the future looks more appealing. Thank you.