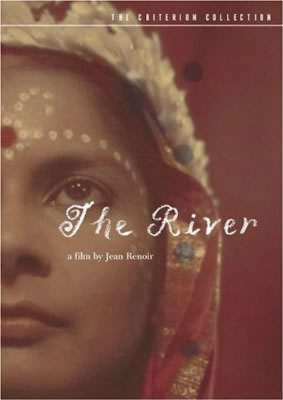 Like many displaced Europeans during the Nazi occupation of much of Europe, the French filmmaker Jean Renoir spent the war years (and sometime afterwards) in the United States. His sojourn in the hills of Hollywood was not especially a positive one. Like other auteurs, he was appalled by the Hollywood factory system and the condescending attitude towards the director. In France he was a God, in America he was a worker for hire.

However, from this brief American period comes one acknowledged classic, THE RIVER, which will be screened in a spanking new 35mm print on the opening night of the 2010 Berlinale this Thursday evening. THE RIVER, although financed by the Hollywood studios, is set in India and it  is with the love of a foreign eye that the dramatic story emerges.

While exotic India gives the film its context, the story itself is centered on an English familly who takes up residence along the banks of the holy river Ganges. The oldest daughter, Harriet, has two close girlfriends: Valerie and Melanie. Valerie’s father owns a jute factory. Melanie is the daughter of a neighbor who is visited by an American cousin whose leg was amputated during the war. The three girls succumb to the American’s charm. During his stay there, love and happiness, jealousy and death come to the people by the river.

The 1951 film, which won a special jury prize at the Venice Film Festival, has been restored  by The Academy Film Archive in cooperation with The British Film Institute and Janus Films. Restoration funding was provided by The Film Foundation and The Hollywood Foreign Press Association, with the newly restored print provided courteosy of the Academy Film Archive, Los Angeles.

Although he became an American citizen, Renoir returned to France to make his latter career films. Although he divided his final years between California and France, he was ultimately buried in France following a state funeral.