“I’ve played all kinds of roles, but the one that seems to have stayed in the imagination of the public was one I did way back in 1975”, veteran British actor John Hurt shared with audiences at the Berlin Film Festival last winter following the premiere screening of AN ENGLISHMAN IN NEW YORK. “When I played real-life gay pioneer Quentin Crisp in the television film THE NAKED CIVIL SERVANT, it made an immediate impact not only on my life but on that of Mr. Crisp himself.” 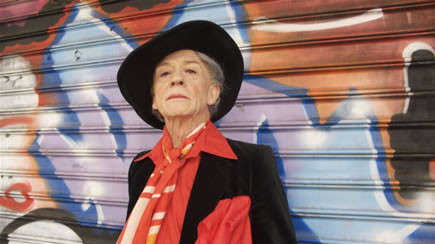 The television film, based on Crisp’s autobiography of his outre life as an “out” gay man in the repressive British society of the 1940s and 1950s, was a pioneering film in its native England and became a major cause celebre at the time. Crisp himself was 65 when  the film came out and he suddenly was thrust into instant celebrity and gay icon status as a result.

Hurt reprises his celebrated role in AN ENGLISHMAN IN NEW YORK, which chronicles the later life of Crisp, who came to New York City on a speaking engagement in the early 1980s and stayed for the final 20 years of his life. Catching up with the out pioneer and wit during his autumnal New York years, Richard Laxton’s made-for-BBC film showcases Crisp’s reconciliation of his icon status. The film makes its Florida premiere tonight at the Fort Lauderdale International Film Festival.

It was not a charmed period for Crisp, although he was widely embraced by the gay community as an original and early pioneer. However, his acerbic comments on the growing AIDS epidemic (dismissing it in a published interview as a “fad”) created a wedge between him and his former supporters which never completely healed until his final days.

The new film does not quite live up to the status of the original, but is absolutely worth seeing as a showcase for a brilliant John Hurt performance. He brings to it the full skill of his decades as an actor; it’s a snappy, razor-sharp performance, full of bitchy charm and devilish grins.

The film ends Sting’s closing title song (it’s from his 1987 album …Nothing Like The Sun and is based on Crisp, who was casual friends with the singer), leaves the viewer with a warmth and good cheer. Crisp remained a controversial figure to his last days, but at least he lived his life by his own moral compass and was a trendsetter and pioneer in ways that contemporary gay culture accepts as its right rather than as a privilege. Without defiant individuals like Crisp, the gay world might still be hiding in its closet.