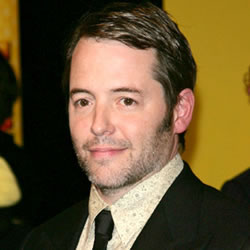 Ferris Bueller himself arrived in Fort Lauderdale yesterday to receive a Career Achievement Award from the Fort Lauderale International Film Festival. Well, to be more accurate, the actor who embodied the teen rebel in the iconic 1980s film FERRIS BUELLER’S DAY OFF, the stage and screen thespian Matthew Broderick, is in town to receive the kudos and to introduce the screening tonight of the American indie film WONDERFUL WORLD.

The son of acclaimed character actor James Broderick, the boyish Matthew, who still sports a youthful look despite his age of 47, is a born-and-bred New Yorker who has moved seamlessly from the Broadway stage to Hollywood cinema for the past twenty plus years.

Broderick first made waves in 1982 when he starred as the precocious young writer in Neil Simon’s autobiographical play BRIGHTON BEACH MEMOIRS. He reprised the role of Eugene in the both the stage and filmed version of BILOXI BLUES, the second installment of the Neil Simon autobiographical trilogy. He made his film debut in 1983 in the Neil Simon-penned MAX DUGAN RETURNS and the Cold War thriller WAR GAMES. He has been seen in many films, mainly light comedies or satires, over the course of the last two decades, including, OUT ON A LIMB, THE NIGHT WE NEVER MET, THE ROAD TO WELLVILLE and THE CABLE GUY.

His most famous role is undoubtedly in 1986’s FERRIS BUELLER’S DAY OFF, a box office success by the recently deceased John Hughes, earned him a Golden Globe nomination. In the film, that has since become a cult classic, he plays a street-wise kid who knows all the tricks. When he decides to take the day off from school, he sets out on an elaborate plan to “free” his fellow classmates from the drudgery of schoolwork and the tyranny of the school dean, portrayed by English character Jeffrey Jones. The film remains Broderick’s best known and most successful at the box office.

With detours in the special effects blockbuster GODZILLA, the children’s classic MR. GADGET and the satirical comedy ELECTION, Broderick has devoted more attention these days to his live theater career. He scored a major success in the musical revival on Broadway of HOW TO SUCCEED IN BUSINESS WITHOUT REALLY TRYING, which showed off his comedic talents and singing voice. This eventually led to his starring role as the neurotic accountant in the Mel Brooks musical version of THE PRODUCERS, a role he reprised in the film version, opposite Nathan Lane. He is currently on Broadway again in a new comedy by playwright Kenneth Lonergan.

In his latest film, WONDERFUL WORLD, which had its Southeast Premiere at the Festival last night, Broderick plays Ben-a failed children’s folk singer and less-than-extraordinary weekend dad. Deeply cynical, Ben’s sole pleasure in life is derived from chess games with his Senegalese roommate Ibou. When Ibou is suddenly struck ill, Ben’s pessimistic worldview seems unequivocally confirmed. But when Ibou’s sister Khadi takes his place in their apartment, what starts as an awkward living arrangement becomes something more, and Ben finds that cynicism may be all a matter of perspective. The film gives the actor a rich role to explore middle-aged ennui and the possibility for personal redemption, in a rich script by writer/director Josh Goldin. The film, which had its international debut at the Tribeca Film Festival, will be released by US specialty distributor Magnolia Pictures in the coming months.