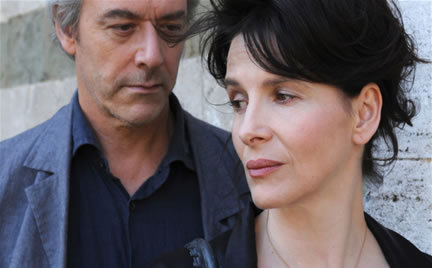 Synopsis: This is the story of a meeting between one man and one woman, in a small Italian village in Southern Tuscany. The man is British author who has just finished giving a lecture at a conference about his new book at a conference. The woman, from France, owns an art gallery. This is a common story that could happen to anyone, anywhere.

Simplicity, beauty, artistic excellence like a lot of art works in Italy, may it be a copy ( which aparently abounds even in Europe) or the original. Certified Copy will mermerize the audience with not only its picturesque cinematography, nor just the eloquence of the script jumping from English, French to Italian, but because of the acting prowess of the two lead actors: Juliette Binoche and William Shimmel.

Simplicity: you will see Juliette in all her glory sans make-up in simple garb as an ordinary mother role. She starts as an ordinary fan who wants a bit of time with the dashing author. She starts simple with her moments with her son with lovely conversations with her pre-teen son who she can not understand, she seems ordinary, normal and simple – the simple mother figure.

Beauty: the camera loves her. A lot of close ups even without much make – up, you get drawn to her beauty. Is it because she has those deep set eyes that convey a lot, even as she bats her eyes lashes it means something? It is because she expresses being a temptress, a depressed problematic mom, a hopeless romantic all throughout her face and body like a beautiful woman that is immortalized in a sculpture. Is she just naturally beautiful outside and within? Whatever it was, Director Abbas Kiarostami and director of Photography Luca Bigazzi captured a copy (moving image of) Juliette Binoche, in her prime – beautiful, vibrant, intriguing and breathe taking just like the Mona Lisa. The original is still the Juliette Binoche, French actress living in France, but we around the world will see a beautiful copy of Julette Bonoche in the film Certified Copy.

Artistic Excellence: Execellence in language, Juliette maneuvers through three languages – French, Italian and English seemlessly. Inspite of the different languages she still expresses her emotions beyond what she says, she communicates through her eyes, her body language, her soul. She commands the scene with such confidence. We get her because even though she is portraying a simple, beautiful wife who seems to be ordinary, the actress Binoche, shows us a complex character much like a Mona Lisa wherein, the closer you look at it, the more you see the intricate details. Her cerebral approach to the simple character, the beautiful being that she plays made a big difference. Why I thought her acting was so effective that she won the Best Actress at the Cannes International Film Festival 2010 and will definitely be nominated again for the Academy Awards is that she

effectively expressed in this film what a woman wants from her man. All the women and hopefully all men in the world should watch this film. In what she reveals in this film I correlate to the saying: “a happy wife, is a happy life.” A message that men should listen to so we will have world (family) peace at home…..

Simplicity: in the beginning, he seems to be a humble middle age author is in the “beginning” stages of popularity. He is an ordinary man who likes to talk about his job, his work and is ordinary enough to get tempted to spend time with a woman for the afternoon, right before he rides the train to the next city…..

Beauty: inspite of his noveau status as a film actor, veteran opera singer William Shimmel, holds his ground with Binoche, equally beautiful, could be a James Bond himself…..

women will enjoy watching the film for just oggling over him with the numerous close-up he gets from the film. He is confident, cerebral and dashing, you will not doubt why Binoche will go googoo-gaga over him. In the film, it is unravelled that he is beautiful but, is he also beautiful from within as well?

Artistic Excellence: for a new film actor, threading through a script with three languages, I think William did well. Of course 80 % of his dialogue was English, with his proper British accent, it added on to his charm. He knows how to unravel himself slowly, emotionally wise. Like an ordinary male, hiding their real selves at the first date. He does that with ease but Binoche would provoke him at every corner and eventually he opens up – he becomes a person who is open to romance, open to opinions and open (maybe) to fall in love.

The film seems to be an ordinary love story, boy meets girl, falls in love with the backdrop of picturesque Tuscan village…..but we get mesemrized with the beauty

of the scenery, the beauty of the actors, the beauty of the languages, arts and culture. But you will get intrigued, as well, with how the screenplay was written to captivate you from beginning to end. For a romantic film it has twists and turns that will make you think, fall in love and ponder about life all in 106 minutes. Certified Copy is artistically excellent. It is a must see movie in 2010.