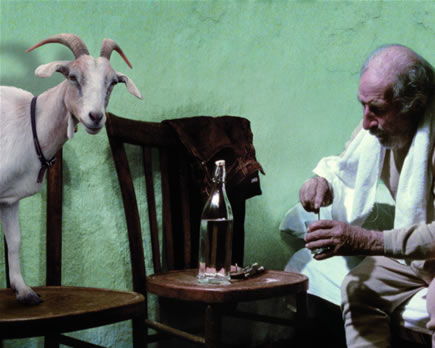 “Ashes to ashes dust to dust.” The film starts with the visuals of ashes and ends with the creation of ashes (coal). Artistically witty and cerebal – Le Qattro Volte appeals to the senses. It makes you ponder on how simplicity and sans dialogue make you think more and process the story line with your own interpretation.

“Circle of life.” Repetition in theme and showing a routinary life of a shepherd reminds us of one’s existence. Day in and day out. What we do defines us. Sometimes it seems challenge-less but at the end one break in routine might cause chaos…. Routine might not be the best, but to some it defines their life, livelihood and existence here on earth.

So, through the visuals I saw in the film I saw a lot of things that came in “four’s.”

I. Theme:
1) ashes that was the book end of the film so black, so basic, so earthy and so needed in their village
2) shepherd – herd (man – animal relationship), the beginning of the film showed the symbiotic relationship of man needing animal – animal needing man.
3) man – traditions, religious traditions such as the Holy Week, reinactment of Jesus’ crucifxion and the Fig tree “Pita” festivities
remind us of the need of man to entertain and maintain their faith, customs and traditions.
4) ashes – livelihood as it ends the story shows how ashes ( coal ) is the livelihood of some residents – showing that
all the community need the coal to cook thus to survive. Ashes came to full circle.

II. Ambience: The Four seasons: winter, spring summer and fall were certainly focused as the backdrop of the film.
The Southern Italy’s mountainous region of Calambria was wonderfully showcased in the four seasons – showing
its beauty and awesome wonder and at the same time featuring the inhabitants’ mundane activities in the foreground that change as the seasons evolve in the background.

III. The Characters:
The four characters in the film were: the shepherd, the herd of goat, the fir tree showcased in the Pita festivities, and the coal.
1) The shepherd was in chapter one. He was old, tired, believing in the tradition of drinking the magic potion of the collected dust (ashes) from their church floor as his elixir in life. His existence is defined by his animals. He seems to be satisfied until he was not able to drink his magic potion one night and in his life all hell broke loose!
2) The herd of goat is dependent on the sheperd and his
dog. They are also statisfield with their routinary grazing in the beautiful Calambrian meadows. They climb up and down the hills with ease and with confidence that their shepherd ( and dog ) will guide them… until one day, break in the routine. The goats have gone astray.
3) The Fir tree showcased in the PITA festivities: tall, majestically towering over the Calambrian hills, suddenly is spotted as the tree of choice for the festivites. It is cut with such revelry and welcomed at the village, entering like Jesus’ triumphant entry on Palm Sunday to Jerusalem. It is shown erect, then downed as it was cut, pulled to town, erected for the festival and downed again to be cut for coal (even the tree has a cyclical journey).
4)The Fir tree is cut to be charred as coal. The final chapter of the film shows the ancient tradition of coal making in Calambria. It takes days and days to create the mountain of log, roasted to perfection and in a day or two emerges as a heap of coal, that will be sold to the villagers as life giving – fuel to their homes.

IV. Calambrian traditions:
1) rigid beliefs in tradition: very rigid, based on ancient religious beliefs, detailed rigid and precise.For instance: The Crucifixion dramatization involves the whole village as actors and spectator are done in the whole village to reinact the 7 stations of the cross. This has been a tradition in a lot of Catholic countries. Year in and year out it is done to build their faith – to maintain their faith.
2) The magic potion, the shepherd exchanges the life giving goat’s milk to the lady housekeeper of the local Catholic church who collects the dust ( ashes ) on the church floor and give them to the shepherd which he uses as his powerful
life giving elixir ( which might be the cause of his constant cough ). But he believes in it, one day he lost the packet of magic potion and misses drinking it one night and his life was turned upside down.
3) join the pack, illustrated with the herd of goat, the villagers are portrayed to be herded by Calambrian folklore of religious traditions that they do as a group. They have to do it together as a group for entertainment, for tradition, for religion and in their case for their existence.
4) creation of coal another Calambrian ancient tradition featured, this scenario is featured as book end to the film. A seemingly mundane tradition defined the village. The villagers depend on this ashes (coal) for their household needs. Backward, as it seems but progressive as they are indepent from gas.

A film that showcase the circle of life, Michaelangelo Frammartino’s “Le Quattro Volte” immerses us in the simplicity of reincarnation, creation, veneration and celebration. People say things come in “three’s” but in this film it reminds us that in life things come in “fours.”