In its 21st edition the festival organized by  Human Rights Watch and the Film Society of Lincoln Center presented  from June 10-24  thirty films from 25 countries  with 28 New York Premieres. The Human Rights Watch organization is an international group with offices in 18 countries publishing well received investigative reports about human rights violations which are taken seriously by policy makers.  It is no wonder that the film festival is also shaped by the expectation that it has an impact, thus empowering the audience through new knowledge about human rights violation. It is safe to assume that the fairly upscale audience attending the mostly sold out programs  at the Walter Read Theatre is  opposed to the violations depicted in the documentaries and that this audience serves an important opinion making function.

Yet as John Biaggi, the festival’s director, readily admits it is difficult to show a quantifiable impact.  He singles out two films, THE GREATEST SILENCE, 2007, (Lisa Jackson) on the systematic organized rape of women in the Congolese civil war. The film was screened for policy makers and circulated among decision makers before the UN passed its resolution on rape as a war crime.  Pamela Yates’ STATE OF FEAR, 2005, on the undermining of Peruvian democracy by the fear of terrorism was translated into 48 languages and broadcast in 157 countries. As John Biaggi points out, “more filmmakers understand that similar human rights violations have been experienced by populations in most countries and therefore their films can resonate globally”. A possible demonstrated impact of a documentary implies that the human rights violation film maker is proactive and savvy about the target audience of policy and decision makers. Thus the film makers are transcending the rather passive political roles the traditional documentary directors or producers have assumed.

It is noteworthy that several of the productions screened this year are perfectly suited for effective instrumental use, if I may use that term. ENEMIES OF THE PEOPLE by Thet Sambath and Rob Lemkin is a most unusual exploration and documentation of war crimes committed by the Khmer Rouge. The documentary is spearheaded by Thet Sambath an investigative journalist whose family was killed by the Khmer Rouge. Sambath tries to understand the reason for the slaughter and establishes over a period of more than ten years a close working relationship if not friendship with lower level poor peasants carrying out the killing, Khmer Rouge cadres and the second in command leader after Pol Pot, Nuon Chea, also known as Brother Two. It is only towards the end of his investigative journey that Sambath starts videotaping peasants, cadres and Nuon Chea. He records their confessions of the crimes and their motivations and revealing then that his own family had been murdered. When Sambath started his investigation he apparently had no plans for a documentary which in part accounts for the success of the film as a highly personal, gripping, and plausible document.  The directors plan to produce a second documentary on the Cambodian power structure and on the part a former Khmer Rouge faction plays in the current government. They refused to hand over their raw material, hundreds of hours of  video tapes, to the  international court investigating the genocide in Cambodia, yet their film ENEMIES OF THE PEOPLE will become part of the court proceedings since it is now a public document. That use of the documentary will have a direct impact on the court proceedings early next year since it is part of evidentiary findings.

PRESUMED GUILTY by Roberto Hernandez and Lauda Negrete with Geoofrey A. Smith as a co-director gives us documentary evidence of the institutionalized system of injustice in Mexico City where 95% of those going on trial are convicted and 92% of all verdicts are based on lay witnesses and lack of scientific evidenced. In their acclaimed short film THE TUNNEL, the filmmakers had already shown several years earlier the failures of the archaic Mexican justice system. The success of that film led to the establishment of the Lawyers with Cameras’ crusade.  As the title of the current documentary shows in Mexico unless you can prove your innocence you are found guilty.  The two lawyer film makers record over a period of three years the attempts of an innocent man to have his murder verdict overturned.   Since they have unparalleled access to the Mexican court and prison system, they can record on camera the inconsistencies and contradictions in the statements of testifying police officials, the presentation of exculpatory evidence, and violations of procedures. The appeal failed and the court’s appeal documents literally copy statements made during the first trial. However, the video recording of the appeal convinced   higher level appeal judges to vacate the sentence and order the immediate release of the defendant, a precedent based on video recording virtually unheard of in Mexico… Though the constitution was amended to incorporate the principle of presumed innocence by 2016, the Mexican police retained the right to detain individuals for up to 80 days without court proceedings. 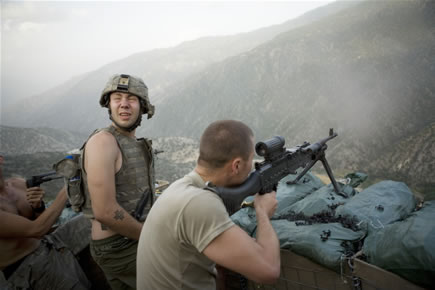 RESTREPO by Tim Hetherington and Sebastian Junger, one of the most widely discussed documentaries decontextualizes the everyday existence, combat, and survival of a platoon of 15 US marines in one of the most dangerous sectors of Afghanistan, the Korengal Valley. The film offers a perfect intimate mirror of the experiences of a tightly knit group of men living in isolation in a desolate place far away from American air power. Collateral killings of civilians and the apparent detachment of the soldiers from politics are of little concern to the soldiers and film makers.

The Indian production NERO’S GUESTS by Deepa Bhatia is noteworthy since it focuses on a structural human rights violation overlooked by the Western press. Penury, poverty and indebtedness cause thousands of farmers to commit suicide each year.  Widespread corruption in the rural Indian political system, a rigid caste structure and archaic money lending practices are the roots of the problem. The shift towards entertainment media and coverage of the experience of the upper middle and higher classes, leave this phenomenon underreported even in India. As the activist P. Sainath puts it, in the major media there are dozens of correspondents covering high society but no rural correspondent concerned with this mass suicide. Hopefully foreign exposure may make a difference.

Michael Camerini and Shari Robertson are probably among the savviest and most productive US documentary film makers having spent now nine years on the film series HOW DEMOCRACY WORKS: 12 STORIES. The festival showed to a packed audience MOUNTAIN AND CLOUDS the second story and LAST BEST CHANCE the last story, films funded by HBO’s documentary division. . Both productions are characterized by superb photography, tight editing, and most importantly entry into the normally closed world of backroom policy making with politicians and their staff speaking freely about sensitive issues. Their investigation into one of the most fundamental issues facing our political system, immigration   is a marvelous achievement by the film makers. .  I should also emphasize that this film series is mandatory for whoever wants to learn about the democratic process and the working of Washington’s political elite.  We have in MOUNTAIN AND CLOUDS superb portraits of the conservative evangelical Republican Senator Sam Brownback and the late Robert Byrd and in LAST BEST CHANCE of the late Senator Edward Kennedy. Even a sophisticated lay person  need to see these documentaries to come to a better understanding of the interconnection of political issues,  the compromises they generate , the  complexity of immigration and  the virtual impossibility of having  solutions satisfying all parties. Given my experience organizing Congressional briefings I can only commend Michael and Shari for taking on such an immense job and doing it perfectly.

Let me single out another thought provoking documentary, 12th & DELAWARE, an HBO documentary by Heidi Ewing and Rachel Gradey. This film juxtaposes an abortion clinic and a pro-life center located across from each other in a small town in Florida. Non-directive interviewing results in superb insights provided by the clients and managers of these establishments.  According to the directors there are many more pro-life centers in the United States than abortion clinics and support for the pro-life movement has been growing.