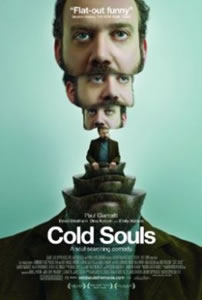 This year, POFF, the Tallinn Black Nights Film Festival, made a real commitment to showcasing new independent films from the USA and Canada. Ten films were selected for the newly inaugurated North American Independents Competition, all of which do not currently have distribution deals in place for Eastern Europe (but hopefully that will change as a result of the exposure here). In all, 25 films from the USA and Canada, many making their European or Eastern European premieres.

In addition to the Competition section, American Independent Cinema was featured throughout the rest of the Festival, beginning with the first-ever Opening Night of an American film, the charming romantic comedy (500) DAYS OF SUMMER, written and directed by Marc Webb. Other dramatic features featured here this week included: COLD SOULS, an existential comedy starring Paul Giamatti and directed by Sophie Bartes; the envelope-pushing sex comedy HUMPDAY, a clever satire on changing sexual roles, written and directed by Lynn Shelton; the latest film from veteran auteur Henry Jaglom, the feminist drama IRENE IN TIME; and the autobiographical MY SUICIDE.

Other films that made a strong impression in Tallinn this week include the military satire THE MEN WHO STARE AT GOATS, with an all-star cast including George Clooney, Jeff Bridges, Ewan McGregor and Kevin Spacey; THE LIMITS OF CONTROL, the latest mind teaser from indie pioneer Jim Jarmusch; EASIER WITH PRACTICE, Kyle Patrick Alvarez’ dramatic meditation on brotherly love and the need for human connection; CALAMARI UNION REMAKE, musician-turned-film-director Richard LeFebvre’s remake of the Aki Kaurismaki film set in modern day Seattle; BLACK DYNAMITE, a spoof of the black exploitation films of the 1970s; and the fashion biopic VINCENT: A LIFE IN COLOUR.

Several strong American documentaries were included in the mix, including BARACK OBAMA: THE MAN AND HIS JOURNEY, an inspirational look at the personal life of the current President of the United States; CON ARTIST, a portrait of artist huckster Mark Kostabi; KASSIM THE DREAM, the story  of a Ugandan-born soldier who becomes a world class boxer; THE COVE, a haunting examination of the killing of dolphins and the efforts to stop mass fishing nets; IT MIGHT GET LOUD, an inspiration music film by Davis Guggenheim; THE SEPTEMBER ISSUE, a rare behind-the-scenes look at the drama and competition at a rarified fashion magazine; and SLINGSHOT HIP HOP, a unique take on the Israeli-Palestine conflict, as seen through the eyes of Palestinian hip hop rhymers.

One only hopes that the exposure given these films at the Festival will lead to some kind of commercial interest, since the screenings here in Tallinn were uniformly sold out, demonstrating that the public is hungry for stories that are not cranked out solely by the Hollywood machine.