The world of documentary film has descended on the city of Amsterdam for IDFA, the International Documentary Film Festival Amsterdam, the world’s largest and most diverse showcase of non-fiction film from around the world. With documentaries showing muscle at the theatrical box office, as well as providing a well of programming for new electronic distribution formats, the hunger for the real is greater than ever. By offering a diverse program of film premieres, special events, industry seminars and a parallel film market and co-production forum, IDFA is a major leader in expanding the form and its audience. 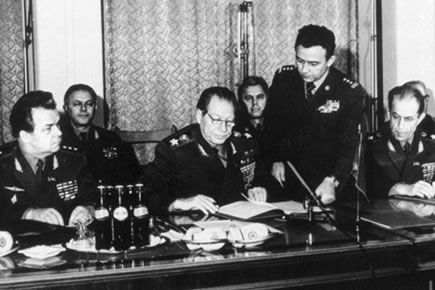 Festivities begin tomorrow evening with the world premiere of a spy thriller that reinforces that truth is oftentimes stranger than fiction. WAR GAMES AND THE MAN WHO STOPPED THEM is the latest work from celebrated Polish documentarian Dariusz Jablonski. The film is appropriately timed with the 20th anniversary of the fall of the Berlin Wall and the subsequent end of Communist regimes across Europe. With the passage of time, more and more stories from that period are emerging.

The film tells the fascinating tale of a Polish colonel who during the Cold War passed on more than forty thousand strategic documents concerning the Warsaw Pact to the American CIA. The film explores his motivations and the personal price he paid for his act of defiance. Was he a hero or a traitor, a patriot or a prostitute? To uncover this truth-is-stranger-than-fiction tale, Jablonski spoke to a large number of former officials involved with the case, including Polish general Jaruzelski, union leader Walesa and the Russian commander-in-chief Kulikov. The director also makes use of the type of graphics used in computer games, which keep the viewer constantly aware of the developing power relations during the Cold War.

Dariusz Jablonski is a well-respected documentarist who previously won a Joris Ivens Award for Fotoamator (1998). He initially pitched the idea for WAR GAMES at the IDFA Forum in 1998. It has taken over a decade for the financing and completion of the film before it now heads to Amsterdam. In addition, the film is competing in the IDFA Competition for Feature-Length Documentary.