What if a clock could count down to the moment you meet your soul mate, would you want to know? That is the provocative question at the heart of TiMER, a quirky and arresting sci-fi romance that will open this year’s edition of the Fort Lauderdale International Film Festival on Friday evening. 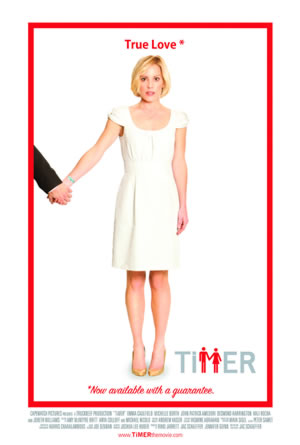 The American indie film, written and directed by talented newcomer Jac Schaeffer, is set in the near future, when technology has taken the guesswork out of love and commitment. Most people make the decision to have a device implanted into their wrist which literally counts down to the day when the wearer will find true love. Random dating or trying out a relationship no longer seems to be necessary when this tech device can tell you in an instant if the man or woman of your dreams is in fact the one you are meant to spend the rest of your days with.

Taking the guesswork out of the romantic equation appeals to Oona O’Lear, a young woman approaching the age of 30, who is tired of waiting for her own would be life partner and gets the device implanted. When she is wooed and falls for a charming but inappropriately young supermarket clerk (with the device indicating that he is, in fact, not THE ONE), her assumptions and those of her technologically trend friends are challenged by the traditional ideas of falling in love and risking what comes next.

Writer/director Jac Shaeffer plays around with the ideas of time and relationships like a malevolent matchmaker, finding plenty of laugh-out loud laughs in the process. With her characters wearing their hearts on their sleeves, so to speak, she is able to explore the ideas of predestination and the belief in love against the odds. She gets terrific chemistry between her two talented leads and generally brings a refreshing female-skewed outlook to the whole proceedings of the romantic comedy genre.

The film, which premiered at last year’s Tribeca Film Festival, has been charming audiences on the film festival circuit with its unusual premise and its individualistic take on how technology and romance could intermingle in the not too distant future. For more information on the film and to view a trailer, visit the website: http://www.timerthemovie.com