Sometimes, I wonder if film festival organizers are aware of how far their events have strayed from the act of merely providing movies to moviegoers. At some point, coffee klatch conferences about how to distribute your product, or sanguine swimming pool gatherings with some studio muck, just gets tiresome; and, all I want to do is watch films. So, that’s just what I did at this year’s SIFF.

Apron Strings is a warmhearted family picture from New Zealand directed by Samoa-born Sima Urale and featuring multiculturalism at its best. 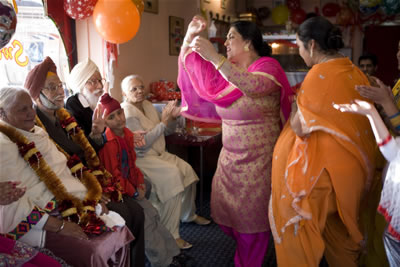 A young biracial man, Michael (Nathan Whitaker), is on a search for the half of himself that’s been denied. Reared by his TV chef mother, Anita (Laila Rouass), following his white father’s death, he can’t fathom why her Indian family disowned them after her marriage. Determined to reconnect to his Indian roots, Michael lands a job at his aunt’s curry restaurant. But rather than reveal his true identity, he befriends his mother’s sister in an attempt to capture his lost culture and eventually rejoin his other family. Of course, Michael’s actions create chaos, but for a time he and Aunt Tara (Leela Patel) enjoy cooking together and taking in an occasional Bollywood flick.

Meanwhile, an alcoholic white man, Barry (Scott Wills), eats at the curry house often because he can’t stomach his own mother’s cooking. Lorna (Jennifer Ludlam) happens to own a bakery next to a Vietnamese pho shop whose garlicky odors sends her into a tizzy of fear over losing customers. Two of the baker’s biggest headaches are her adult children—the aforementioned drunken loser son who, at 35, has no job but one disastrous idea after another that includes gambling the money she loans him. As for the baker’s pregnant daughter, Virginia (Jodie Rimner), a macrobiotic vegan, she’s just revealed that she and her unborn baby’s father have split.

The well-written characters here are acted with superb skill, but one detail sticks out like a sore thumb. Without giving away that surprising scene, let’s just say it’s unlikely a baby born under those circumstances would look like it does.

Not only are the dramatic scenes engaging, the humorous ones tickle. After the sisters make up, they decide to prepare a meal together. But in spite of her TV cooking fame, Anita is no master chef. Hurling a hunk of dough, she shouts at Tara, “I can’t even fold a bloody samosa!”

Black Dynamite is a hilarious send-up about so-called blaxploitation films directed by Scott Sanders and starring Michael Jai White as the titled hero. 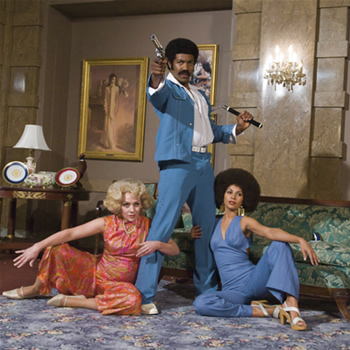 The term blaxploitation as applied here is debatable, but it’s a fact that films with nearly all-black casts in the early 1970’s were the highest grossing in Hollywood. Following the success of stories like Sweet Sweetback’s Badass Song and Superfly, studios oversaturated audiences with like-themes and less substance. Thus, blaxploitation was born.

After his brother is murdered by the mob, Black Dynamite, a former CIA agent (think: The Spook Who Sat by the Door), vows to find his killers. Meanwhile, the ghetto is being inundated with malt liquor that cruelly cripples black men. This film is all about stereotypes handled in a smart and sassy way. And underneath it all, layered in between laughs, is a real message about self-reliance and unity.

Salli Richardson-Whitfield, in her requisite Afro and hoop earrings, is a community activist on a mission to end the destruction of orphaned black children through the heroin they’re shooting up–we’re talking about grade school children here. She’s also the “good girl” that Black Dynamite can actually fall in love with. After all, his male chauvinist self has hundreds of ‘hos’ hot for him.

One funny scene features a round table discussion of pimps including Arsenio Hall and Brian McKnight. As Black Dynamite, White’s muscular physique and martial arts skills are a natural. Look closely and you’ll see exact replicas of fighting scenes used by Bruce Lee in his various American-distributed flicks.

This true tale about Chinese opera performer Mei Lanfang (1894-1961) begins with him as a teenager. In an early scene, he makes it clear that he’s not gay and will not indulge male patrons with his affection in exchange for their money. Instead, he practices long and hard to move up in the opera world. In fact, he moves so far up, he surpasses his own teacher who unhappily challenges him to an opera duel to determine who is more popular.

After marrying, Mei (Leon Lai) falls for another opera performer (Ziyi Zhang). The two become intertwined and things get messy. Somewhere, it’s not exactly clear where, two children are born. Unmentioned until the scene where they appear, their arrival is confusing. As Japanese forces occupy the city, Mei refuses to perform in spite of having his life threatened. Later, he becomes a hit in America.

Plagued by production woes–some disagreement over copyrighted material, the family’s insistence that unsavory details be omitted, and the exorcism of some key scenes when one of the actresses was cut due to the (Edison Chen) nude picture scandal that broke out in Hong Kong–Forever Enthralled shows some stress. Nevertheless, it remains rich with images and music. If you’re not a Chinese opera fan, it could be torture. However, if you enjoy the acting, costumes, stories and trilling music unique to it, you’ll love this picture.

Kabei (Our Mother) is director Yamada Yoji’s masterpiece about the period in Japan leading up to WWII.

A professor (Bando Mitsugoro) has been writing dissenting material about Japan’s involvement in China. So, in the middle of the night authorities drag him out of bed and to prison while his wife and two young daughters watch helplessly. It then becomes Kabei’s (Yoshinaga Sayuri) duty to manage their lives while her husband suffers behind bars. Besides having to apologize to her policeman father for her husband’s indiscretion, Kabei must also kiss up to local officials who eke out visiting times like they’re rationed rice.

One of the professor’s young students, affectionately called Yama-chan (Asano Tadanobu), lends some comic relief with his bumbling efforts to help his sensei’s family. But, it’s really strong, powerful women that Yamada focuses on (see: Twilight Samurai). His male protagonists are often overly kind and sensitive, and even Yama-chan appears weak and inept.

Yamada also likes to frame his films with exquisitely detailed background minutiae. For instance, in the opening scene the father comes home as the mother is taking down laundry outside. With the focus on her, we also see through the window behind her that the father is piddling around.

Based on the true story of Nogami Kayo, this film highlights duty over personal desires and features some incredible acting including Sato Miku playing the youngest daughter. The Japanese word “bei” is used as a term of endearment. Everyone in this family addresses each with that suffix. “Ka” is short for okasan (mother).

School Days with a Pig (Buta Ga Ita Kyoshitsu) is another offering from Japan.

Directed by Maeda Tetsu, and starring NHK’s Tenjichin actor, Tsumabuki Satoshi, this role is a huge departure from his current taiga samurai part. Here, Tsumabuki plays a sixth-grade teacher who wants his class to learn that life is about sacrifices. So, he brings a piglet to school and explains that the students will raise it for a year before eating it at graduation.

Enthusiastically, the children construct a colorful pen near the playground and take turns caring for the piglet. Besides feeding it, they also have the responsibility for cleaning up its waste–which they grow to accept as they begin bonding with P-chan, the name they’ve given it. Whenever they’re not playing soccer with P-chan, they take him for a walk on a leash. When P-chan escapes one day, a little girl grabs him and falls with him against her chest. In that instant, as she feels his frightened heart racing, she realizes that P-chan is a living being.

As graduation nears, the class is divided. Half of them want to leave P-chan to the 2nd graders who have agreed to inherit him, while the other half votes to send him to a pig processing plant. One thing they all agree on is that they themselves cannot butcher and eat P-chan whom they’ve grown to love.

Based on a documentary that caused a national debate, this movie is Japanese-cute. From the J-pop soundtrack, the sweet children, their colorful clothing and hairstyles, to their obento boxes—everything looks anime style. Even P-chan is a cute name. If you don’t know the meaning of kawai in Japanese culture, this movie will teach you.

So, that’s it. No facts and figures about festival attendance, celebrity sightings, production workshops, or anything of the sort. This is simply a wrap-up of some films that I watched at SIFF.