After you have produced one of the influential documentaries of your generation (and also won an Oscar for it), what do you do for an encore? Well, for Davis Guggenheim, the director of AN INCONVENIENT TRUTH, the rousing documentary that focused on the debate surrounding global warming and climate change (and that resurrected the moribund political career of former vice president Al Gore), the focus returns to a fundamental American challenge: the eroding educational system. 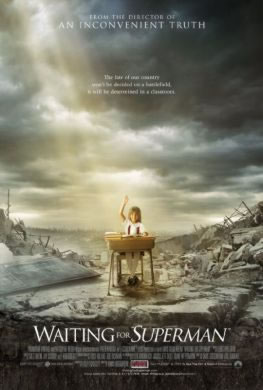 Screening on Wednesday evening as the Centerpiece Film of the AFI-Discovery Channel Silverdocs Documentary Festival, WAITING FOR SUPERMAN takes a long, hard look at the current way that young people are taught and trained in the USA, and finds many things wanting.

When a federal policy called “No Child Left Behind” was announced in 2001, it seemed like a heaven-sent legislation that would put some teeth into enforcing educational standards around the country. However, on the ground, the legislation that greatly expanded the federal role in schools has become a controversial focal point of education policy.  Looking at the issue from the angle of students, teachers and parnts, Guggenheim’s offers a multi-layered assessment of the rise and fall of the U.S. school system, one of the cornerstones of America’s perceived strengths.

Has the legislation increased the educational value and produced young people who are ready to compete with the fastly-growing populations in China and India for jobs of the future? Lackluster test results and increased pressures on teachers and administrators have seen America fall far behind such nations in terms of the efficacy of education. Can America regroup and regain its dominance or are we condemned to see our rankings fall even lower as much of the innovation and technological prowess is pioneered by our Asian allies? The film offers more questions than answers, but does so in an enlightening and entertaining fashion that is this director’s primary strength.