THE GANDHI LEGACY IS ALIVE AND PERPETUATING WITH RUSSELL SIMMONS, DR. BEN CHAVIS, SMI/SWAGGMEDIA.COM AND MUSIC 4 PEACE AS THEY ANNOUNCE ALIGNMENT WITH SOUTH AFRICAN GOVERNMENT FOR THE WORLD CUP, AND TOURING INDIA AND BRAZIL 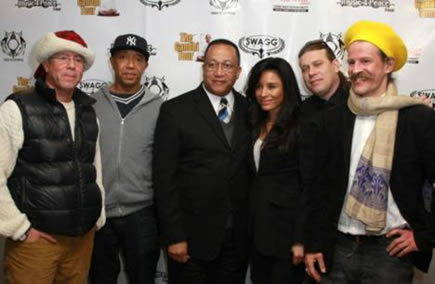 (Los Angeles, CA) Wednesday, January 27, 2010 – “The way to create change is to empower,” stated civil rights leader Dr. Ben Chavis, at the launch of the Music 4 Peace Initiative and Tour (www.music4peacetour.com) which held a press conference at the Miners Building on Main Street at the Sundance Film Festival. The purpose of the press conference was to introduce the Music 4 Peace Initiative and Tour, introduce its collaborative partners, the goals of the Tour and the first tour stops in 2010.

The Music 4 Peace Initiative and Tour is a collaborative initiative that aims to educate, empower, and improve the world beginning with the universal language of music. The collaborating charities include: Hip Hop Summit/Action Network, Tribes of the Worlds, Music4Peace Foundation and The Gandhi Tour. These non profits have banded together to promote a global message of peace and harmony utilizing music, artists and global resources to inspire humans across the globe to mobilize for change. Music and humanitarian charities across the globe will be 2010 campaign recipients.

Russell Simmons commented, “Hip-Hop music artists are leaders in the youth movement.  We’re excited about the potential these diverse organizations have in coming together to harness music as a transformative and unifying power to promote peace throughout the world.”

Music 4 Peace has adopted the mantra of “Peace, Water and Wisdom” and strive to eradicate world hunger and violence while providing clean water and teaching empowerment.

The first events announced for the 2010 tour include:

SMI/SwaggMedia has partnered with The Music 4 Peace Tour and Initiative to co-produce the tour and as a media partner presenting the messages to the world while connecting viewers and inspiring them to donate or contribute to those in need.  Professional basketball player David West, co- founder of SwaggMedia also sent a video message supporting his participation with the World 4 Peace Tour.

Music4Peace also announced the launch of the Film 4 Peace Contest to raise funds for the Millennium Development Goals, The Hip Hop Summit and aid to Haiti. The winning filmmaker will be awarded a trip for two to South Africa in June 2010 to attend The Music 4 Peace Tour “Hip-Hop Summit South Africa’s” inaugural concert event and two tickets to the United State’s opening match against England at the World Cup! Visit www.music4peacetour.com for more details.