While the Toronto International Film Festival, which opens next week, is the very definition of an international event, with almost every filmmaking country on the planet represented somewhere in its vast program, it has a special place in its heart for its homegrown cinema. Not only does the Festival embrace its native talents but it realizes that it provides an important showcase for visiting distributors, programmers and film critics to check the pulse of contemporary Canadian cinema.

In a future posting, I will focus on the films from emerging Canadian filmmakers that will make their premieres at the Festival. However, in this introductory piece, let me savor the newest offerings from some of Canada’s (and my own) favorite film artistes. 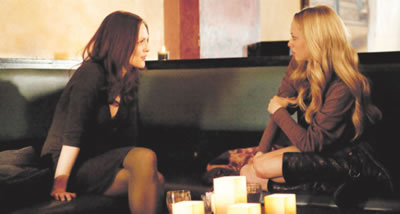 No Canadian survey is complete without a film from Canada’s film laureate Atom Egoyan. His newest film CHLOE, starring Julianne Moore and Liam Neeson, will have its World Premiere at the event. Moore plays a successful doctor who suspects her husband of cheating so she hires an irresistable young woman (MAMA MIA’s Amanda Seyfried) to test his fidelity.

Other highlighly anticipated Canadian films being showcased in the TIFF Gala and Special Presentation sections include COOKING WITH STELLA, filmmaker Dilip Mehta’s delicious social satire about a Canadian diplomat (Lisa Ray) and her chef husband Michael (filmmaker/actor Don McKellar) who are posted to New Delhi; THE IMAGINARIUM OF DOCTOR PARNASSUS, a Canadian/UK co-production directed by the ever imaginative Terry Gilliam; CAIRO TIME, a world premiere Canadian/Irish co-production by Ruba Nadda, starring Patricia Clarkson as a magazine editor who falls in love with Cairo and her Egyptian interpreter while visiting her ambassador husband; DEFENDOR, an arch satire by director Peter Stebbings that stars Woody Harrelson as an avenging superhero; HUGH HEFNER, an intimate and controversial look at the flamboyant founder of the Playboy empire, directed by Brigitte Berman; the French Canadian J’AI TUE MA MERE (I Killed My Mother) by Xavier Dolan, about a brash teenager who is locked in a love-hate relationship with his mother; and THE TROTSKY, a charming coming-of-age tale by Jacob Tierney about a young man who is convinced that he is the reincarnation of Soviet leftist Leon Trotsky. Lots to savor…….