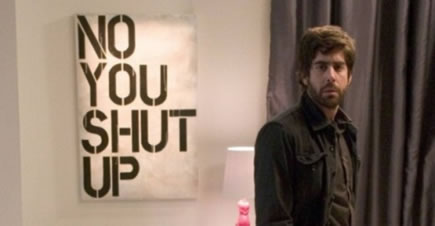 (UNTITLED), a sharp comedy about the New York art scene, was the winner at the inaugural North American Independents Competition at POFF, the Tallinn Black Nights Film Festival. The film, directed by Jonathan Parker and co-written by Parker and producer Catherine Di Napoli, was a major hit here in Tallinn, with capacity crowds attending sold-out screenings.

The film, which had a theatrical release in the United States via Samuel Goldwyn Company, tells the tale of a fashionable contemporary art gallerist in New York who falls for a brooding new music composer. Adam Goldberg (“Two Days In Paris”) plays the composer, whose work calls for paper crumpling, glass breaking and bucket kicking. Marley Shelton (“Grindhouse”) plays the gorgeous Chelsea gallerist, whose latest show features an artist, played by Vinnie Jones (“Snatch”), who employs taxidermy and household objects. Further complicating the affair is the composer’s brother, played by Eion Bailey (“Band of Brothers”), whose highly commercial art work – the financial backbone of the gallery – is sold to corporate clients discreetly out of the gallery’s back room.

The film boasts a highly entertaining script and charismatic performances from its leads. Amidst all the satire and lampooning of the pretensions of the art world, there is also a serious discussion of the purpose of art and the commitment to art for art’s sake. In a society where everything seemed to be measured by its commercial value, (UNTITLED) betrays the subversive notion that some things must be appreciated for pure passion alone. In that sense, it is a film that should work well in Europe and attract the attention of European distributors, audiences and critics.

For more information on the film, visit: http://www.untitled-themovie.com/ For a list of the films in the North American Independents Competition, please visit:http://2009.poff.ee/eng/films/
programs/competition_of_north_american_indies