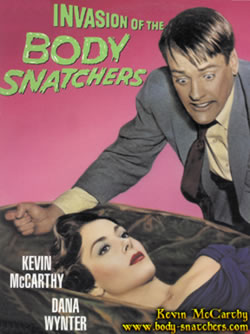 For a classically trained actor, it has probably been a source of much amusement to him that he is best remembered for his role in a low budget sci-fi film that has since become a classic. As the lead in the 1950s film THE INVASION OF THE BODY SNATCHERS, Kevin McCarthy played a doctor who becomes alarmed when he discovers that the people in his small town have been transformed…..into aliens. The fact that the film, produced at the height of the McCarthy period, was a deep allegory has made one of the most iconic of the Eisenhower era.

Although his iconic role is still his most famous, McCarthy’s career extends far beyond that. A stage player from Washington, McCarthy earned a Supporting Actor Oscar nomination for his first film, playing the role of the elder son Biff in the filmed version of the Arthur Miller classic DEATH OF A SALESMAN (1951). McCarthy had originated the role on the London stage.

Over the next 10 years he alternated leads in small movies: NIGHTMARE (1956) with supporting roles in larger movies THE MISFITS (1961 playing Marilyn Monroe’s husband), and THE BEST MAN (1964). Later, director Joe Dante cast McCarthy in colorful roles in a number of his films, including THE HOWLING (1981), TWILIGHT ZONE-THE MOVIE (1983), INNERSPACE (1987), and MATINEE (1993). He can still be seen both in large-scale theatrical films and made-for-video cheapies, though he takes greater pride, no doubt, in his long-running stage vehicle “Give ‘Em Hell, Harry!” (as Harry Truman).