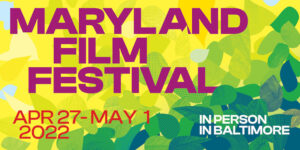 The Maryland Film Festival (MdFF) returns to a live and in-person event this year, running Wednesday, April 27, through Sunday, May 1. As in past years, the opening night event is a screening of a collection of short films (six this time). Throughout the following four days, there will be many more shorts programs to choose from (16 more, in fact), plus 21 features (two in a double feature for closing night) and one hour-long episode of a new HBO series. Tickets and passes are still available, so be sure to check out the schedule of eventsand make your choices now. Know that this year one has to not only purchase tickets or passes, but reserve seats ahead of time (follow all online instructions). At some screenings, crew and/or cast may be there, so don’t miss out!

As a Baltimore resident, I fully support the festival and attest to its importance in our cultural life here. Founded in 1999 by Jed Dietz, who served as director until 2018, the MdFF is now run by Sandra L. Gibson, along with artistic director Christy LeMaster, and continues to bring terrific new movies to Charm City. What follows are five capsule reviews of films I recommend, based on screenings I watched at previous festivals or from my previewing of advance screeners. All titles are hyperlinked to their page on the MdFF website.

The art world is in turmoil, courtesy of a system built on inequities of access, social class, and money, with race, gender, and ethnicity additional factors. In order to make it, you first have to go into debt, as galleries most often won’t showcase work by artists who haven’t gone through an MFA program (usually expensive). Unfortunately, those graduate schools have become just as concerned with success as dealers and exhibitors, which means that true iconoclasts can find themselves kicked out, no one understanding how they’ll fit in. It’s capitalism at its grotesque best. So goes The Art of Making It, Kelcey Edwards’ debut feature documentary. With a diverse cast of interview subjects, the movie follows the disturbing trends of the first few decades of the 21st century and imagines what a different future might look like.

By the time married French volcanologists Katia and Maurice Krafft died on June 3, 1991, on the slopes of Mount Unzen, in Japan, they had long since established themselves as premier experts in their field. As we learn in Fire of Love, director Sara Dosa’s excellent archival documentary about the duo, they pioneered much of the research now taken for granted. Not only that, but they were talented filmmakers, as well, leaving behind a treasure trove of film footage­, as well as completed moves, featuring striking close-up shots of lava flows and ash clouds. Sadly, it would be one of the latter—from a type of volcano they labeled a “gray” one, which they considered the deadliest—that would kill them. Dosa (The Seer and the Unseen) allows her late subjects to do all the talking, bringing us directly into the fascinating, dangerous world that quite literally consumed the couple. It’s a gripping tale of obsession and, yes, love.

There is a delightful deadpan feel to Jethica that belies the horrors within. When death comes knocking at the door, it is but a plot point, allowing director Pete Ohs (Youngstown) ample room for his gentle, if serious, meditations on agency, identity and friendship, the whole of it wrapped up in a quasi-horror scenario. We start on Elena (Callie Hernandez, Under the Silver Lake), who, after a coital romp in the back seat of a car, enthralls her lover with her tale of hiding out in New Mexico after killing a man. Excuse me? And that’s not all. In that flashback—which is virtually the entire film—she runs into an old friend, Jessica (Ashley Denise Robinson), similarly running from something, someone, or both. Before long, there are supernatural shenanigans afoot, and only Elena seems to know what to do, approaching the matter with aplomb. With a mix of humor and pathos, Ohs follows his bracingly odd narrative all the way to its unexpected conclusion. Nothing is what it seems, and that’s all for the best

Beware the face that turns you to stone! Or, at the very least, leads you astray towards things you’d rather not see. That way lies sin, and life is much more manageable within a strict set of rules. Such is the setup of Medusa, the sophomore feature from Brazilian director Anita Rocha da Silveira (Kill Me Please), in which she explores how religion and patriarchy are used to control women. It’s even better if you can teach them to control themselves. A biting satire of religious fundamentalism, the movie is also a frightening portrait of extremist violence and righteous self-abnegation, with a little sex, drugs and rock & roll mixed in. One of the great pleasures of this fascinating work is that there is plenty of room to pick your own interpretation. One thing is certain, however, which is that Medusa will gaze at you and you will gaze right back, all the stronger for it.

Navalny (Daniel Roher) [excerpted from my recent review for this site]

Poisoned in 2020 by, no doubt, minions of Vladimir Putin, Russian opposition leader Alexei Navalny nevertheless made the decision to face whatever horrors awaited him and went back home. Was he naïve, hopeful, merely stoic, or more? It’s not quite clear, but one thing is certain: he is a brave and capable thorn in the dictator’s side, and perhaps someone who could bring his country out of its current nightmare. We learn a lot about him in Navalny, a thrilling new documentary from director Daniel Roher (Once Were Brothers). With a principal interview with its subject filmed during his German convalescence, supplemented by ample other footage with family and colleagues from the same period, along with archival material and snippets from Navalny’s own YouTube channel, the movie crafts a sharp, three-dimensional portrait of a wily, irreverent soul who, if he does not perish in his current circumstances, could make a positive difference in this world.

Other films I recommend include Marvelous and the Black Hole, Mija, and You Resemble Me, along with the debut episode of the new HBO series We Own This City (screened with members of cast and production crew in attendance). And then there are those copious shorts: so many to choose them! I myself will head down to check out the BaltiShorts program, since, you know, we’re in Baltimore. Be sure to get your tickets to whatever you wish to see before they sell out. Again, any MdFF title hyperlinked here will take you where you need to go to make that happen. Enjoy the fest!