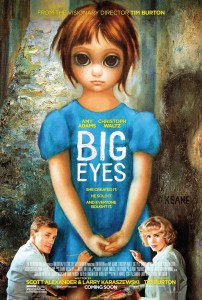 From the whimsical mind of director Tim Burton, “Big Eyes” tells the outrageous true story of one of the most epic art frauds in history. In the late 1950s and early 1960s, painter Walter Keane (Christoph Waltz) had reached success beyond belief, revolutionizing the commercialization of popular art with his enigmatic paintings of waifs with big eyes. The bizarre and shocking truth would eventually be discovered though: Walter’s works were actually not created by him at all, but by his wife Margaret (Amy Adams). The Keanes had been living a colossal lie that had fooled the entire world. A tale too incredible to be fiction, “Big Eyes” centers on Margaret’s awakening as an artist, the phenomenal success of her paintings, and her tumultuous relationship with her husband, who was catapulted to international fame while taking credit for her work.

One of the reasons the Keane art resonated in America is that it came at a time when art was at the forefront of society and maybe Keane art was a nice, comfortable introduction for mainstream society to enter into that world. You can’t have a kinder or more approachable subject than a child or a pet. The art was mysterious to people and a big part of the mystery was that Walter Keane was being presented as the painter. Here was a masculine guy painting crying children, and a great cockamamie story abut the orphans after World War II, the skinny fingers and big eyes and sad faces, but something seemed off. Once you know the real story, which is that Margaret Keane was sad and she was painting sad children, suddenly, it legitimizes the art. The art became so popular there was a whole movement of ripoff art. If you were a kid in the 60’s, you would see this art everywhere. While Keane was the top-selling artist, his work was not accepted by the conventional art world. The literal, sentimental portraits of stylized children were a far cry from the abstract expressionism that ruled the art world in the late 1950s.

It’s a great piece of history that nobody knows. Margaret Keane is a great female character that embodied the beginning of the Women’s Movement. It starts with her as a 1950’s housewife who does everything for her husband. Margaret is complicated, like most human beings. She’s definitely a little shyer, and she’s very humble. That’s one of the qualities about her that allowed her to be manipulated. Walter Keane really invented the mass marketing of art. He wasn’t accepted in galleries and by art critics so he built his own galleries, put out his own coffee table books. He figured out how to make the paintings so cheap that the average man could buy them. He totally revolutionized the art world and even Andy Warhol acknowledges stealing a little bit from Walter Keane’s philosophy. But what’s amazing is the secret behind it all: the paintings were his wife’s and he manipulated her into letting him put his name on them and taking all the credit.

Through the course of the story, Margaret Keane learns to stand up for herself. As she developed as an artist, she continued to paint “Keanes” attributed to Walter, but she also created elongated psychological paintings of women, often self-portraits, which she signed MDH Keane and publicly claimed as her own. Walter Keane died in 2000. She still gives him a lot of credit.

Amy Adams based her performance on the elderly woman she actually met. In the end, you can really only go with the text because everything else, all of our memories, even of ourselves, are skewed. So going with the text, trying to help tell the story but at the same time being mindful of who Margaret Keane was as a person and what’s important to her now. She is a Jehovah’s Witness and that is why she wants to show that these things can happen in our life but we can find redemption at the end of it and strength within ourselves, so that’s give permission to tell her story. There are not a lot of great parts for women in Hollywood movies and this is a great story. Watching Amy Adams like a master class in acting where she’d find the moments in between moments. With Amy Adams artistic interpretation, while understanding Margaret Keane a little better. It’s really magical.

Tim Burton loves Margaret Keane’s art. Burton grew up during the heyday of the Keanes and is familiar with the work. He identified with the idea of outsider art, and why does art have to be legitimized by what critics say? And that’s really what the movie’s about. The idea of outsider art, of primitivism and he really identifies with that, so it’s always very close to him. Burton is also a noted visual artist. His own work and the unique look of his signature style were influenced by the paintings of Margaret Keane.

A lot of people have drawn parallels between her art and his and worked closely with MOMA curators to create the recent ‘Tim Burton’ exhibit that toured internationally. A lot of his characters have large disc eyes and that’s more than a coincidence. He finds a connection to characters that have that certain look and the Keane art is definitely the first time that’s ever seen in mass culture. People tend to associate Burtons world and his work with darker subjects, noting that before the art exhibit, he was seen predominantly as a director, but now he is recognized as a visual artist as well.

“Big Eyes” explores the turmoil and a darker side of the art world and it’s something that even a handful of years ago might not have been right for Tim Burton. It isn’t visual effects-driven, but rather story and character-driven and that’s something he welcomed. This story really is about a relationship, a straightforward, almost conventional story, yet with very unconventional ingredients and a very unconventional filmmaker. Burton doesn’t make fun of these kinds of things. He understands that there’s a lot of heart in these paintings. As an artist himself, he understands what goes into this and why it’s important. It’s similar to “Ed Wood”, a character that most people just laughed at. We wanted to concentrate on his passion and figure out a way for people to understand that it’s not a joke. That’s sort of what this movie is too: Margaret Keane is not a joke. Tim Burton tells a very great personal story, as well as discuss issues of the art world and the Women’s Movement. “Big Eyes” is a perfect vehicle for Burton. It’s just marvelous.