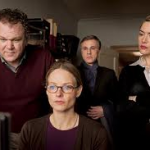 A comedy? Lazy, tedious Polanski. It’s all about putting on and taking off coats. Moviegoers will not rush out to the theater after seeing this.

Why did 78 year old Roman Polanski want to do a film adaptation of Yasmina Reza’s play, God of Carnage? It is lazy filmmaking. After all, there is only one set – a gorgeous Brooklyn apartment – and 4 actors in the same clothes bitching about their lives.

Perhaps Polanski related to the play about children behaving badly and parents getting all upset and moralistic over it.

As soon as my husband and I meet a new couple, we immediately get past pleasantries and get drunk. We then dive into the state of our marriage, our failures, our children’s psychological shortcomings, and our sex life. Finally, we cut to the chase and suggest wife-swapping. 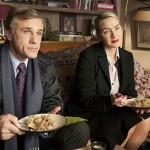 Is CARNAGE a comedy? I did not laugh once.

Reza’s play was a big hit in France and England. On Broadway, it garnered Tony Award nominations for all four actors in the original cast: Jeff Daniels, Hope Davis, James Gandolfini, and Marcia Gay Harden. Harden won the Tony for Best Leading Actress in a Play. It is the third-longest running play of the 2000s! 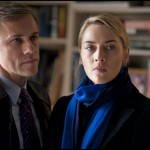 Doing a play is very demanding. You have to memorize a lot of dialogue and there are no car chases.

Offhandedly, peddling introductory social banter, Michael makes the mistake of mentioning he abandoned his daughter’s noisy hamster outside on the street.

Now Kate has something on hardware wholesaler Michael!

Trying to be civil, the Cowans attempt to make a graceful exit after expressing their surprise and dismay over Zachery’s attack. Well, Kate is sincerely apologetic; Alan knows his son is a little monster. But Penelope is not happy with just an apology; she wants to know if Zachery is truly sorry. Penelope wants Zachery to throw himself on the mercy of the Longstreet’s court. There will be no appeals for leniency.

I was waiting for Penelope to demand Zachery do community service and get counseling. 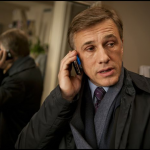 It gets damn tedious replaying the same scene over and over again – each time Kate puts on her coat and goes to the door to leave, either Penelope or Michael say something and its back inside for another go-around. At least Alan has his cell phone and more pressing matters to deal with.

I counted the number of times the Cowan’s headed for the door. It was exhausting. I wanted to shout at the Cowans – “Leave already!”

Then there is the horrible vomiting scene. Kate gets sick and vomits all over the Longstreet’s living room, Alan’s suit, and Penelope’s treasured art catalog. But no, the Cowan’s still do not leave. This was probably very shocking to theater audiences, since no one vomits in public anymore. (Well, those of us who participate in ayahuasca ceremonies know “purging” all night long in the company of strangers sitting all around you purging themselves is ‘de rigueur’.

(My second nod to Frenchwoman Reza.) 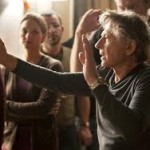 If any of us were in this situation, we would have left immediately. Who wants to hear a couple purging their psychological crap? Who wants to join in and commiserate?

Instead, the two couples start drinking.

Penelope, the pompous instigator, is demanding not only compensation for the dental work – that the Cowan’s easily agree to – but abject remorse. As Alan finally announces, “He’s an 11 year old boy!”

As the foursome wallow in their miserable, but privileged lives – Michael is a highly successful, but ruthless corporate lawyer – the play descends quickly into boring, narcissistic banter. As if to be even more punishing to audiences, Penelope is a self-satisfied liberal working on a book about Darfur.

Instead of baling on this funny, biting satire, I waited. I was sure Kate would undress or Michael would make a serious pass at Alan. 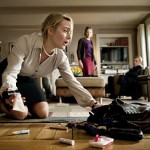 Foster is high-strung and tense. Foster allows Polanski to show not only her age, but her stern, starved of protein, face. Her character may be the one hailed by a Tony Award, but it is not pretty. Winslet is too beautiful, big, and a solid visual presence to be the demure wife of a viper. Waltz is terrific. His manner, air, speech, and facial cruelty gives Waltz a strong platform showcasing a man who is more interested in screwing people in a pharmaceutical fraud then his kid’s redemption. It is the more meaty role. Reilly has trouble with Michael. Reilly is so non-threatening and with such a friendly façade that when his Michael turns, it is surprising.

CARNAGE is only for people who loved the play.

If you would like to be included on Victoria’s private distribution list for a  weekly preview, just email her at masauu@aol.com. Victoria Alexander lives in Las Vegas, Nevada and answers every email. You can contact Victoria directly at masauu@aol.com.