At best, Butler (as the Mr. Miyagi of surfing) got to learn how to surf from a professional. 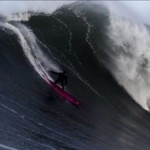 How could a film be marketed as an ”inspirational true story” when the surfing phenom-legend Jay dies in 2001 at age 22 after drowning while “free diving” in the Maldives? Free-diving is incredibly dangerous.* His reckless lifestyle ended at 22! Isn’t it fascinating that if he had not pursued surfing, he would never have become internationally famous and had enough money to be vacationing in the Maldives. However, I believe that if he hadn’t died in the Indian Ocean, in the Maldives, he would have slipped in a bathtub full of water and died.

The Queen of the Ocean, Brazilian goddess Iemanjá, wanted him and took him.

I was recognized as a child of Exu in the Umbanda religion last year in Curitiba. The goddess Iemanjá is one of the seven orixás of the African Pantheon of the Candomblé and Umbanda religions. She is the patron deity of the fishermen and the survivors of shipwrecks, the feminine principle of creation and the spirit of moonlight. 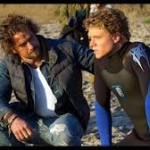 In a 2002 survey, Boardtrac, a surf industry group, estimated the American surf population to be 2.4 million. So will CHASING MAVERICKS be a hit? Remember my review of THE BIG YEAR? The bird watching community in the U.S. is huge but the film was an epic flop. It cost $41 million to produce and grossed a staggeringly flat $7.1 million in its lifetime. It’s foreign total, $244,000, might be the smallest foreign gross for 2011 according to Indiewire. http://blogs.indiewire.com/theplaylist/2011-by-the-numbers-the-year-in-box-office-flops

I did not do any research ahead of seeing the movie. I did not know what the story was about or who Jay Moriarity was in the surfing community. Could this really be the “true story”? “When legend becomes fact, print the legend“.** There are so many contrived pieces that when it gets down to the philosophy of surfing – indeed, there is one! – it looks silly. But Gerald Butler does his best reciting lines that would make anyone not getting paid squirm.

Jay Moriarity (Jonny Weston), 15 years old, lives in Santa Cruz, a surfer’s mecca. He is the care-giver of his drunken-abused by men, mother Kristy (Elizabeth Shue, who has it stipulated in her contracts that she must appear in bed and allowed to make a just-had-sex moan). Jay’s neighbor Frosty Hesson (Butler), who just happens to live directly across the tiny dirt street from Jay, is a renowned surfing legend. What a surprise! 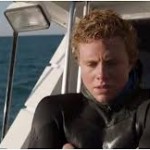 Everyone in Jay’s school is into surfing and skateboarding. For some reason, there is one guy Sonny (Taylor Handley) and his two-guy posse, who hates Jay. Why? Is Sonny better off then dirt-poor Jay? Is this a foreshadowing of a showdown to come? Will Sonny sabotage Jay in the water? Will Jay emerge crippled but opens up a school teaching Haitian children to surf?

Frosty is a man’s man who has to sneak out of the house every morning to ride Mavericks, the mythic waves. Mavericks are on the biggest surfs on Earth! Frosty promised his wife Brenda (Abigail Spencer) he wouldn’t surf those waves. He’s not a man who easily shows his emotions. He might love his wife, but hardly ever shows it. This foreshadows his tough approach to training Jay.  Jay sneaks into Frosty’s truck and finds Frosty and three of his friends riding the Mavericks. He’s hooked. 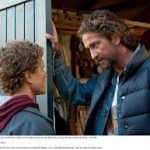 So, wide-eyed innocent Jay corrals Frosty to be his Mavericks-riding mentor. Here is where the “Wax on, wax off. Wax on, wax off” comes in. Only this time, its three, single-spaced compositions on the meaning of surfing, hours of paddling, and holding one’s breath.

Fresh-faced Jay is such a fine young man that when he discovers his best friend, Blond (Devin Crittenden), is the local drug dealer, he does not get involved. This recurring theme goes nowhere. Why is it in the movie? 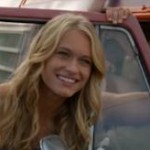 We know the big day will come when the 50 foot swells, indicative of the Mavericks, turn up in Santa Cruz. Will Jay be ready? What about his gorgeous, older girl crush, Kim (Leven Rambin)? Will the bad guy steal her away? Will she hook up with Frosty? Frosty has a mousey wife with an adoring look and too-big mouth.

Moriarity, at only 16, became a worldwide phenomenon in 1994 by wiping out spectacularly on a 30-foot Maverick. Refusing to be rescued, he continued to surf. The shot was captured on film and landed him on the cover of Surfer magazine. He was anointed a living-legend.

Frosty does go through an emotional trauma giving Butler the required “character arc”. He doesn’t save Jay from drowning, doesn’t run off with Kim, but tells Jay he loves him. Finally, he has achieved a transformed life through selflessly giving surfing lessons to a fatherless young man. 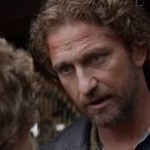 Directed by Michael Apted and Curtis Hanson from a screenplay by Kario Salem, CHASING MAVERICKS is as corny as them come of “inspirational stories”. But wouldn’t it have been a far more important film if Hanson has told the tragic story of a young man who, coming from a fatherless, disadvantaged background, becomes a star at 16 and then recklessly drowns?

The surfing scenes are indeed breathtaking, but where is the villain? Can you get angry with the overwhelming power of water?

While Butler knows he’s teetering on a thankless carpenter-philosopher role, at least he tries. He looks great in a surf suit. Weston is so new and fresh, he just did as he was told. He needs seasoning and a director who can take the time to work with him on his emotional scenes. But when a star is on board and an executive producer, and there’s a lot of technical work with water, there is no time to teach someone how to act.

* Some diving organizations, such as the Diver Alert Network, say up to 40 people die worldwide each year from free diving accidents. Even those aware of the danger can be victims. The 2009 death of a St. Petersburg Catholic High graduate — a fit and experienced diver — offered a glimpse into the little-known world of free-diving, a growing phenomenon that teeters on the edge of tragedy. Some experts put those numbers much higher and say deaths have increased in recent years because of the sport’s increasing popularity. Many free divers don’t like to talk about the risk. Some don’t know it’s there until it’s too late.