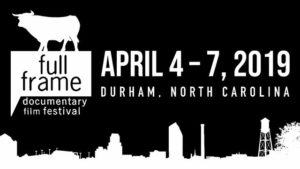 The 2019 Full Frame Documentary Film Festival (its 22nd iteration) ran from April 4-7, in Durham, North Carolina. Sadly, I could not be there in person, but I was able to watch a number of a films remotely, and I here present five of those which I particularly liked, in alphabetical order. Though none of the below received any accolades at the festival, the film that won the Grand Jury Award, One Child Nation, I saw at Sundance, where I reviewed it for Hammer to Nail (for which I am lead film critic). It is deserving of all honors. All of the capsule descriptions of the following movies are shortened versions of pieces I have written for either Hammer to Nail or this site, as indicated in the text. Enjoy!

Ask Dr. Ruth (Ryan White, 2019) [the paragraph, below, is an adaptation of a longer review I wrote for this site, which will post in full on May 3, the date of the movie’s release]

A licensed sex therapist with impeccable academic credentials, Dr. Ruth K. Westheimer – or simply Dr. Ruth, as she soon became known – leapt from a tiny station to the bigtime of national television within less than 5 years of her media debut, forever transforming our national discourse on all matters sexual. A force of nature, she is still going strong at 90, as we see in director Ryan White’s supremely engaging documentary about her. The film offers a comprehensive profile of its subject, following Westheimer as she travels across the globe, revisiting her past and reconnecting, in the present, with those who have journeyed by her side. Her various talk shows, reaching increasingly wide audiences, were revolutionary in both style and content. She is a national treasure and should be cherished. Thanks to White (Netflix’s The Keepers) and his mostly marvelous (if occasionally long) film about her, we can do so again and again.

The Infiltrators (Cristina Ibarra/Alex Rivera, 2019) [the paragraph, below, is an adaptation of a longer review I wrote for Hammer to Nail, which has yet to post, as of this writing]

A movie as much dramatized reenactment (if not more so) as documentary, The Infiltrators pushes the boundaries of form while delivering a message of searing content. Following two undocumented activists as they successfully get themselves arrested and thrown into a detention center in Broward County, Florida, the film reveals the degrading treatment our country metes out to those it deems unwanted. Mixing footage of its real subjects with that of actors portraying them, directors Cristina Ibarra and Alex Rivera create a hybrid work that is equal parts journalistic exposé and taut drama, and one hundred percent cinema.

Los Reyes (Iván Osnovikoff/Bettina Perut, 2018) [the paragraph, below, is an adaptation of a longer review I wrote for Hammer to Nail, which has yet to post, as of this writing]

A lyric ode to the friendship between two canine residents of the oldest skate park in Santiago, Chile, Los Reyes (“The Kings,” also the name of the park) offers sublime filmic joys of a rare kind. Filled with stunningly beautiful images – mostly focused on dogs Football and Chola – accompanied by audio of the young skateboarders as they ride and relax, discussing family, drugs, school and more, the documentary presents a remarkable world where all live in harmony. The dogs roam free, unmolested, and though young Chola loves to chase anything on wheels (and the occasional donkey), she and her older companion leave everyone else in the park to their own devices. The ostensible simplicity of the conceit masks an underlying profundity that slowly rises to the surface until, by the end, we are fully engaged by this urban space overflowing with such unbridled joie de vivre.

Miles Davis: Birth of the Cool (Stanley Nelson, 2019) [the paragraph, below, is an adaptation of a longer review I wrote for Hammer to Nail, which has yet to post, as of this writing]

Jazz legend Miles Davis (1926-1991) gets his cinematic due in documentarian Stanley Nelson’s latest work, the comprehensive Miles Davis: Birth of the Cool, the title of which comes from its subject’s eponymous 1957 compilation album. Following Davis from birth to death, Nelson (The Black Panthers: Vanguard of the Revolution) showcases his genius and talent, while also shedding light on his considerable demons. Still, even if by no means a hagiography, the movie nevertheless skirts the more troubling aspects of Davis’ mercurial moods, allowing some discussion of his physical abuse of women without delivering the full reckoning that such revelations deserve. No amount of brilliance and cultural significance can justify bad behavior, though Davis is hardly alone in his violence. He was certainly one of a kind when it came to musical innovation, and Nelson’s film makes amply clear why his legacy lasts to this day.

Where We Belong (Jacqueline Zünd, 2019) [the paragraph, below, is an adaptation of a longer review I wrote for Hammer to Nail, which has yet to post, as of this writing]

A visually sumptuous, if melancholy, elegy on the premature loss of innocence, Swiss director Jacqueline Zünd’s documentary Where We Belong follows five children of broken homes as they navigate the complexities of post-divorce life. Focusing almost exclusively on her young subjects, Zünd (Almost There) avoids all but the most peripheral inclusion of adult perspectives, the parents seen at the edges of the frame or not at all. Instead, this movie gives voice to heretofore disenfranchised boys and girls  whose fractured realities, though now normalized to a degree, remain the formative influence on their lives. The camera is a powerful therapist, however, and the frank conversation it engenders allows for some powerful catharsis, with we the viewers the vicarious beneficiaries of the attendant emotional release.

And those are my five recommendations! Perhaps next year, I will make it to the actual festival.