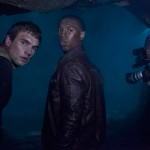 Teenager Andrew Detmer (Dane DeHaan) has one of those white trash trailer lives. His father is an abusive drunk and his mother is deathly ill spending her life in her bed hooked up to oxygen. Andrew’s father hates him but he is obsessively protective of his wife.

Like most teenagers addicted to YouTuding their lives, Andrew’s big, cheap video camera is memorializing every moment in his life. His schoolmates mock him – he’s lunging around a camera from the 80’s.

We are seeing “found footage” so up to a point CHRONICLE has a haphazard look and a “where is this going” approach. What will happen? What will be revealed by Andrew’s chronicle of the boring life of a teenage outcast? 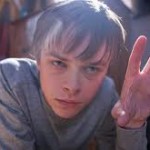 Encouraged by his cousin Matt Garetty (Alex Russell), Andrew goes to a rave where they meet up with Steve Montgomery (Michael B. Jordan), one of the more “popular” kids at school.

Andrew has issues. He’s clinically depressed and resents being bullied at school and at home.

Wandering away from the rave, they stumble on a big hole in the ground. They go in and find a mysterious pulsating thing that gives them telekinetic powers. They can put together Legos with their minds and change the channel on the TV. Each day, with practice, their abilities improve. They are now a solid group of three with a big secret.

But Andrew isn’t happy with Steve liking him now. Why wasn’t Steve interested in him before? Homosexual panic or “The love that dare not speak its name”?

Matt, the most “mature” of the trio, wants to establish some “rules”. Andrew and Steve start using their superpowers at school and playing pranks on unsuspecting people.

Soon Steve learns to defy gravity and starts flying. Andrew and Matt join him and soon they are playing football in the clouds.

And with this, the worm turns. With every day, their powers increase and they like it.

While you might use mind-over-matter powers to hit jackpots at a casino, these seventeen-year-olds haven’t seen RAIN MAN. 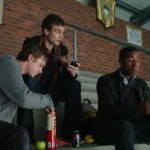 Andrew starts to believe he is divinely called and, like any bitter teen, starts getting revenge.

And the government seals off the area around the hole.

When another car tries to pass them one night, Andrew uses his superpower to force the car off the road and into a lake. The car crashes, the driver dies, and Matt and Steve are freaked out about Andrew.

Meanwhile Andrew’s mother is getting worse and there is no money for her medicine. He takes some ridiculous chances. Telekinetic powers? Yes. Intelligence? No. 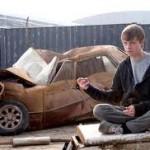 CHRONICLE takes a twisted, menacing turn that is stunning and lots of fun. The only problem is you step outside the movie to watch how cleverly the director, Josh Trank, keeps the premise of “found footage” going. (They have to come up with a better way to make “found footage” work.)

Trank solves the problem by using footage assembled from strangers – just the way CNN uses iReport iPhone video from people who think first about recording a disaster than fleeing.

The cast is terrific and the special effects look great. And when Andrew’s mind is released through his powers, the movie takes on an unexpected, nasty thrill.