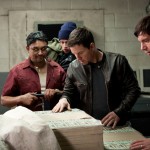 Remember how terrific Mark Wahlberg was in THE DEPARTED and THE FIGHTER? In both, Wahlberg had strong directors. However, not here. You loved J.K. Simmons in BURN AFTER READING and JUNO. The only one who comes out of CONTRABAND with any dignity is my personal favorite – so far he can do no wrong – Ben Foster. Remember the homoerotic element Foster infused into 3:10 TO YUMA?

Without question, Giovanni Ribisi and Simmons go way overboard with their characters. No matter how many weird characters Ribisi plays (THE RUM DIARY, FLIGHT OF THE PHOENIX), I keep seeing him desperately trying to erase his performance in THE OTHER SISTER.

They are all here working hard to sabotage Baltasar Kormákur’s CONTRABAND.

In THE HOLLYWOOD REPORTER’S Actors Roundtable Discussion (December 2011), THR asks George Clooney, “Do you think you were bad and have become better?”

Clooney: I think scripts make people better. Direction makes people better. You can find a lot of projects where actors were tremendously good in one project, but you’ll see them not work necessarily well in others. I think scripts make a huge difference in that department. http://www.hollywoodreporter.com/news/george-clooney-albert-brooks-oscars-christopher-plummer-descendents-267221 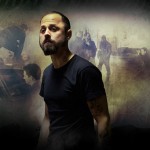 Ribisi plays Tim Biggs, an almost homeless drug kingpin. Biggs is a feared, big money drug lord who lives in squalor. The only thing missing from Biggs is missing teeth. Ribisi gives Biggs a weird high-pitched, screechy Daffy Duck voice. He is almost upstaged by Simmons (The Captain) who keeps going in and out of a hybrid New Orleans accent.

Chris Farraday (Wahlberg) was the greatest smuggler there ever was. We know this because people keep introducing him that way. But what happened to all the money he earned from smuggling? He and his family live in a middle-class dump, his wife works as a hairdresser, and he is struggling with his contractor business. Farraday has a mantra. All he keeps saying to his wife Kate (Kate Beckinsale) – all through the absurd heist – is “I love you”. After the tenth time, I said, “I get it. You love her.” 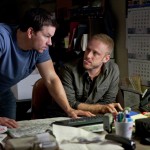 Chris’s dumb and scrappy brother-in-law Andy (Caleb Landry Jones) throws Brigg’s nearly million dollars of cocaine overboard when custom agents intercept the shipment. It falls to Chris to pay off Andy’s debt and save Kate and his two boys from being wacked by Biggs.

Chris gets his best friend and fellow former smuggler Sebastian (Ben Foster) to put together the usual “one last job”. Chris, Andy, and Danny (Lukas Haas) get crew jobs on a ship going to Panama. Guess who is onboard? All of Chris’s former crew. Chris, who is against drug smuggling on ethical grounds, plans on bringing back millions in counterfeit bills. 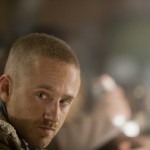 As we all know, in an action movie, time must be running out. Here, the clock ticks with only an hour stopover in Panama. Luckily, with no traffic on the streets of Panama, Chris runs into some problems with crazy international counterfeiter Gonzalo (Diego Luna). When Andy slips away with the cash for the phony bills, Gonzalo demands Chris and Danny slam into an armored truck he is going to rob. Meanwhile, back in New Orleans, there are plot twists, reversals and rugpulls.

Written by Óskar Jónasson, Arnaldur Indriðason and Aaron Guzikowski, CONTRABAND is based on a 2008 Icelandic thriller which starred this film’s director, Baltasar Kormákur. Kormákur knows how to stage tension but he cannot direct his cast. He is talented, but with seasoned American actors, and with Wahlberg as a producer, you have to hold the reins tight.