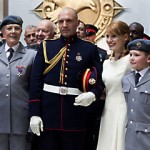 Fiennes’ modern interpretation is absolutely brilliant. There is pronounced homoeroticism and mother-fixation.

Fiennes must do Macbeth next. How about his take on Richard III? King Lear?

You haven’t read William Shakespeare’s military tragedy Coriolanus in decades. Here it is, envisioned by director and star Ralph Fiennes, in a remarkable prescient time when it easily leaps from ancient Rome to our war-hungry present day. The re-dressing of Shakespeare’s play is emblematic of the massive protests across the Arab World known as the Arab Spring that began in December, 2010.* 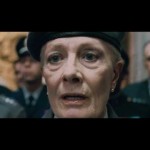 Set in modern Rome, aristocrat Caius Martius (Ralph Fiennes) is a hero soldier, returning victorious from a war with a neighboring Italian tribe, the Volscians, who are led by Martius’ great rival, Tullus Aufidius (Gerard Butler). The Volscians are defeated, and thanks to the heroism of Martius, and sporting scars of battle, he returns to Rome beset by revolt by the common people. Martius has contempt for the people and their petty complaints. Before his victory, he had brutally suppressed the rioters. Now, for his bravery, the Tribune gives the honorific title of “Coriolanus” (meaning “crowned one”) and offers him the title of Consul of Rome. All he has to do is win the votes of the common people.

I’m not a Shakespeare scholar by any means, but what is with the playwright’s mother-fixation? There are some very strong, dominant mothers in Shakespeare’s plays suggesting an Oedipal fixation. Fiennes makes this clear in his staging of Martius and his mother Volumnia (Vanessa Redgrave), one of the pantheon of Shakespeare’s cunning women: Lady Macbeth, Margaret in Henry VI Parts 1-3 and in Richard III, and King Lear’s Goneril and Regan, all women who lusted for power and greatness. 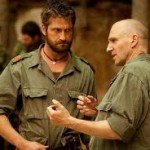 Martius has a very public meltdown spitting his disgust at the common people. He banished from Rome. He is condemned to never see his mother, wife Virgilia (Jessica Chastain), and young son again.

Furious at being banished, Martius decides to team up with Aufidius and wage war on Rome. Here is where Fiennes subtly explores the homoeroticism between the two men.

Fearing the Maritus-led Volscians – whose soldiers are in awe of him – the Tribunes send first Menenius (Brian Cox) Maritus’ former mentor, and then Volumnia, to plead for peace. Volumnia comes with Maritus’ wife, son, and a chaste gentlewoman. All of Rome knows Martius and the Volscians will destroy the city to rubble. 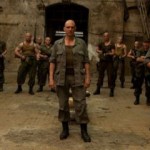 There is a magnificent confrontation between the mighty, manipulative Volumnia and her son. Fiennes plays it for all its worth, giving Redgrave an Academy Award spotlight she richly deserves.

Volumnia succeeds and Martius signs a peace treaty between the Volscians and the Romans! When Maritus returns to the Volscian capital, Aufidius kills him for his betrayal.

Brian Cox is known for his work with the Royal Shakespeare Company, where he gained recognition for his portrayal of King Lear. Watch Cox’s video “Shakespeare for Toddlers”. http://www.wimp.com/shakespearetoddlers/. It is wonderful!

James Nesbitt, who appears in CORIOLANUS as Tribune Sicinius, appeared in Shakespeare’s As You Like It on stage. I’ve been watching Nesbitt in Series 3 of “Murphy’s Law” available from Acorn Media (acornmedia.com). This is the first time Gerald Butler has taken on Shakespeare and he does a terrific job. Of course, Redgrave is glorious. 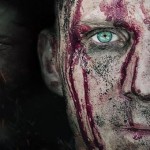 And finally, Fiennes is electric as Coriolanus and a powerful director. His knowledge of Shakespeare is extensive and it appears he has done every one of the Bard of Avon’s plays on stage.

The screenplay by John Logan is richly current and the Director of Photography, Barry Ackroyd, gives the film a tough, war-ravaged look.

There is not a false note in CORIOLANUS. And, non-Shakespeare fans will find it not medieval, but perfectly suitable to today’s modern ears.

*The Arab Spring, otherwise known as the Arab Awakening, is a revolutionary wave of demonstrations and protests occurring in the Arab world that began in December 2010.  There have been revolutions in Tunisia and Egypt, a civil war in Libya resulting in the fall of its government, civil uprisings in Bahrain, Syria, and Yemen, the latter resulting in the resignation of the Yemeni prime minister; and major protests in six other Arab countries.

The protests have shared techniques of civil resistance in sustained campaigns involving strikes, demonstrations, marches and rallies. Many demonstrations have met violent responses from authorities, as well as from pro-government militias and counter-demonstrators. A major slogan of the demonstrators in the Arab world has been “the people want to bring down the regime”.

Victoria’s weekly column, “The Devil’s Hammer,” is posted every Monday.http://www.fromthebalcony.com/editorials.php.