I hated the kid.

I knew, quite well, two “brilliant” children. “Brilliant” based on their parents claims the children’s I.Q’s were too high to be measured by traditional tests. One was given a special tutor at his school and the other was home-schooled. The special tutored boy’s only achievement was high scores playing video games. The home-schooled boy had a made-up language he and his parents spoke, was socially inept, and was into square-dancing with his parents. He called his parents by their first names. I never saw either of them build or fix anything or say anything remarkable. Both were not verbal champions but did read a lot.

Neither boy ever amounted to anything.

Remember how adorable Ray Boyd was in JERRY MAGUIRE? Remember this cute exchange? 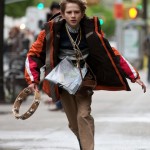 Well, novelist Jonathan Safran Foer’s Oskar Schell and director Stephen Daldry’s Oskar (Thomas Horn) is a nine-year-old know-it-all who takes Ray’s cuteness and knowledge of nonsense and amplifies it to the nth degree.

He is so self-reliant that he freely roams all over New York City. He’s nine years old and lives in New York City for God’s sake!

Oskar’s monotonous narrative is punishing. Realizing that this kid is insufferable and barely tolerable, we are asked to consider he has undiagnosed Asperger’s Syndrome. Yet, Oskar shows no obvious signs of Asperger’s. He certainly does not have poor communication skills, obsessive or repetitive routines, and physical clumsiness, all indicators of AS.

The lack of demonstrated empathy is possibly the most dysfunctional aspect of AS. Individuals with AS experience difficulties in basic elements of social interaction, which may include a failure to develop friendships or to seek shared enjoyments or achievements with others, a lack of social or emotional reciprocity, and impaired nonverbal behaviors in areas such as eye contact, facial expression, posture, and gesture.

Well, Oskar is friendless and does not love his mother. He not only makes eye contact with strangers, he intidimates them with his verbal skills. I cannot imagine why Daldry and screenwriter Eric Roth found Oskar so endearing.

Schell’s father Thomas (Tom Hanks) was in the World Trade Center on September 11, 2001. Oskar printed out images of the “jumpers”.* He thinks his father may have jumped rather than be engulfed by flames. Well, isn’t that pleasant!

Oskar is so self-realized, obnoxious, and rude to his apartment’s doorman Stan (John Goodman) that if I had to spend another two hours with him, I would have wanted to jump from the Stratosphere Tower (the tallest structure in Las Vegas).

Oskar is a nasty piece of work. On that dreadful day, Oskar comes home early from school. He hears his father’s voice messages. He hides them from his mother, Linda (Sandra Bullock). He denies her listening to Tom tell her he loves her. Oskar is selfish. He sneaks out and buys an identical answering machine, records the identical outgoing message, and keeps the old one for himself. He counts his lies.

Oskar has “head-up-his-ass” platitudes and has read too much Jean-Paul Sartre.

How could anyone think Oskar is adorable? He loves his scientist/inventor/jewelry store owner father, but shows no emotion towards the suffering of his mother. She is grieving the loss of her husband, but Oskar has no sympathy for her. He is mad she sleeps too much.

While searching through his father’s stuff, he finds a key. Instead of just asking his mother about it, he goes off on a hunt all over New York City. What secret will the key unlock? He thinks it’s a message from his father. The package containing the key has the word “Black” written on it. Oskar starts to interview every person named “Black” in New York City and the other boroughs.

He is so precocious we are asked to think him brilliant beyond his years since he knows exactly how many steps he walks from his school to home, how many minutes are in Eternity, cn alphabetize and cross-reference every “Black” in New York, and so forth. He can get around New York City better than a veteran Pakistani cabdriver.**

Oskar is also an amateur cartographer.

Oskar does have one redeeming quality. He is bonded to his grandmother (Zoe Caldwell) who lives across the street from him. He has binoculars and a 2-way walkie-talkie that they communicate with. It is the only cute thing about Oskar. But Grandma is keeping a secret of her own. Her Renter (Max von Sydow) does not speak but takes a liking to Oskar. Pompous Oskar has a set of rules The Renter must follow if he wants to accompany him on the interviewing process.

I would have spanked Oskar for his insensitivity to the physical limitations of an old man. I understand why The Renter refused to speak to Oskar.

All this aside, the blame for this mess rests solely on the shoulders of Daldry and Roth. Thomas Horn is a very capable actor in his first film. He is front and center in every scene. It is a demanding role. He carries the film and – let’s just say it – is at the mercy of his seasoned director. 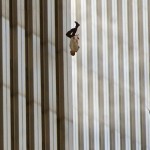 *While the U.S. media never showed the “jumpers”, European TV did. In most American newspapers, the photograph that Richard Drew took of the Falling Man ran once and never again. USA Today came to the conclusion that at least two hundred people died by jumping — a count that the newspaper said authorities did not dispute. If the number provided by USA Today is accurate, then between 7 and 8 percent of those who died on September 11, 2001, died by jumping out of the buildings; it means that if we consider only the North Tower, where the vast majority of jumpers came from, the ratio is more like one in six.

**I’m not being racist by singling out Pakistan. I did the research: Immigrant drivers are most often from three regions of the world: 6.8% of drivers are from South Asia, primarily Pakistan (2.9% of all drivers) and India (2.3% of drivers).

If you would like to be included on Victoria’s private distribution list for a weekly preview, just email her at masauu@aol.com.  Victoria Alexander lives in Las Vegas, Nevada and answers every email. You can contact Victoria directly at masauu@aol.com.