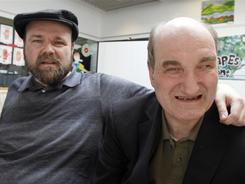 “Intelligence, shown in a different way”: Tracy Thresher, 43, left, and Larry Bissonnette, 53, have become globe-trotting ambassadors with a message. A new documentary, Wretches & Jabberers, follows the two autistic men around the world.

A documentary about two middle-aged autistic men and their global journey to change attitudes about autism is on the big screen this month.

Part advocacy film, part road trip/buddy movie, Wretches & Jabberers follows Tracy Thresher, 43, and Larry Bissonnette, 53, as they travel from their hometowns in Vermont to Sri Lanka, Japan and Finland to meet other advocates and educators, and shed light on the inner lives of autistic people with little or no speech.

Along the way there is humor, sadness, insight and even a hint of romance.

The film, which opened in New York last weekend, will play in 40 AMC Theatres during April, National Autism Awareness Month. In a partnership with the Autism Society, a national support group, AMC is donating 10% of ticket sales to the group.

Interest in the documentary is so great that its run will be expanded to 80-100 other theaters in May, says Lee Grossman, president of the Autism Society.

The goal of the film is “seeing people who are different from you and seeing our commonality,” says director Gerardine Wurzburg, who won an Academy Award for Educating Peter, a 1992 film about Down syndrome.

“Because they don’t talk, many assume that (people with autism) don’t have anything to say.” But “Larry and Tracy deconstruct that theory.”

Autism is the most common condition in a group of developmental disorders known as the autism spectrum disorders. An estimated 1 in 110 children in the USA are affected; about 40% do not talk at all. Although more information about autism has become available in recent years, “including an explosion of firsthand accounts,” there hasn’t been much about people without speech, says Douglas Biklen of Syracuse University, who specializes in disabilities education and produced the film.

Both Bissonnette, an artist, and Thresher, an activist, grew up unable to speak.

“Nothing I did in acting and living my life convinced people I had an inner life until I started typing” at age 34, Bissonnette notes in the film.

Because their aides are constantly at their sides when they type and are shown giving them physical support — a hand under an elbow or on the shoulder — some have questioned whether the film’s stars are typing their own thoughts and ideas.

Key to the skepticism is a long-standing debate over a technique known as “facilitated communication,” in which assistants help people with limited speech by holding or guiding them as they type. “Facilitated communication is the single most discredited intervention in the history of developmental disabilities,” says psychology professor James Todd of Eastern Michigan University.

Howard Shane, director of the Center for Communication Enhancement at Children’s Hospital Boston and an associate professor at Harvard Medical School, says many people with autism type independently. So he finds it “curious that those being facilitated can only create these insightful comments” when helped by an assistant.

Todd and Shane have seen just the online trailer. Biklen, who is credited with introducing facilitated communication to the USA, says viewers see ample evidence that “Larry and Tracy are very much in control of their communication,” even reading aloud their typing at various points.

“This film is really about two people who are … trying to change attitudes about autism.”