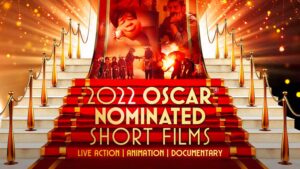 All five Oscar-nominated Live Action Short nominees did a fine job telling their stories, but in my opinion, the Oscar for Best Live Action Short film should go to either Ala Kachuu – Take and Run or On My Mind.

This is a good story about a young woman who is kidnapped and forced into an unwanted marriage. After leaving her home village for the city of Bishkek, capital of Kyrgyzstan, to get a good education, she takes a job at a bakery. One day, after closing up shop after her first day at work, she is abducted and taken to an off-the-beaten-path village where she’s trapped by her abductor and his family. She tries to escape by horse but is unsuccessful; she then escapes by car but runs out of gas. This short has the standard story components: bad guy, good guy, dramatic act breaks. It’s fine filmmaking.

This is a touching story about a man saying goodbye to his wife, who is on life support. After agreeing with doctors to pull the plug later in the day, the husband goes to a bar to have a triple shot of whiskey. While there, he sees a karaoke machine and is determined to sing Elvis Presley’s “Always on My Mind” so he can play it to his wife as she goes off life support. The bar owner says no, since the machine is only used on weekends, but the husband doesn’t take no for an answer. On My Mind proves a well-crafted film that taps into our sad emotions without having to create a bond between the characters.

This features an excellent opening: Los Angeles in the future, where everything is automated, even the judiciary. A young Latino man is eating a banana while walking down the street going to work, when all of a sudden he gets a text on his cell phone notifying him that he’s been arrested. Within seconds a Police Department drone shows up, hovering just a few feet away, telling him what to do and where to go, spitting out handcuffs for him to put on. He has no access to a human being while in jail, or while awaiting his hearing. An interesting movie of what life would be like living in a police state run by algorithms.

A woman with dwarfism, who works as a hotel maid, declares to her BFF co-worker that she just wants to be normal. One night, while she plays a slot machine, a truck driver strikes up a conversation with her, claiming that he doesn’t care about her height. So what if she’s a little person, he says. So, she gets all dolled up for her date with him—new dress, hair, and make-up—but it disappointingly does not end well. This is a stark tale of bitter letdown.

A disturbing film about a Muslim Indian family living in the UK. While the whole family (all three generations) are enjoying their day, (especially the women who are getting their hair and nails done), all of a sudden some right-wing extremists in black vans show up and start rounding up all the immigrants. They line them up on their knees and execute them. It’s terrifying, but I don’t see it being realistic, at least not in the liberal England with which I am familiar.

[On February 25, the Oscar® Nominated Short Films, presented by ShortsTV, opened in theaters in the U.S. and Canada. To learn more about the participating theaters and how to purchase tickets, please visit https://tickets.oscar-shorts.com.]

Jeremy Taylor is the founder of Film Festival Today