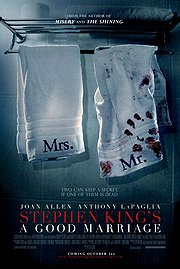 This is the first feature film screenplay Stephen King has adapted from one of his works in 25 years. The last one was PET SEMATARY in 1989. King’s screenplay for A GOOD MARRIAGE is from his short story “A Good Marriage” from the collection of four novellas titled “Full Dark, No Stars”
published in November 2010.

King has said that A GOOD MARRIAGE was inspired by the BTK Strangler Dennis Rader. Kerri Rawson, the daughter of Rader, has criticized King in the first public comments from a member of Rader’s family since his2005 conviction.

I recall that it was Kerri who – supposedly, without her knowledge – inadvertently led to her father’s arrest. Police had learned that Rader’s daughter had recently been in the hospital for a pap smear. Under a judge’s order, the hospital gave investigators a sample of her DNA. In 24 hours, the results came back. It was a familial match.

Paula Rader was married to Kerri’s father for 34 years. Like most serial killer wives, Paula was shocked to learn her “family man” was an active sadistic killer – who taunted the police with riddles – for their entire marriage.

Stephen King did not need Dennis Rader’s life to inspire the short story and subsequently the film.

His co-workers nicknamed him “Green River Gary”. Judith Mawson was married to Gary Ridgway, “The Green River Killer”, for 13 gloriously happy years. She refused to believe he had killed close to 80 – police think it’s closer to 90 – prostitutes.

Darcy Anderson (Joan Allen) and her husband Bob (Anthony LaPaglia) are celebrating 25 years of happy married life. They have a son Donnie (Theo Stockman) and a cherished daughter, Petra (Kristen Connolly) who is getting married. Their marriage is still a very hot, sexy affair with “I want to be on top” and “Naughty Girl/Naughty Boy” teasing. Bob travels a lot and goes to coin conventions. For their anniversary, Bob gives Darcy a pair of earrings.

Serial killer Peter Tobin did not allow his wife Cathy Wilson togo into their basement. Although he had a sadistic personality and threatened to kill her and their toddler son, she ignored the horrible smells emanating from the basement and the constantly clogged drains.

There is a gruesome serial killer making the news. The killings are horrific and the female bodies keep cropping up. Darcy is alone in the big house since Bob is on one of his frequent business trips. Looking for batteries in the garage and – in de rigueur horror style – all the doors and windows are kept unlocked, finds a bondage magazine. In 25 years this is the first time Darcy has nosed around the garage. She finds a hidden box containing the driver’s licenses of women. A lot of them held together with two rubber bands. One rubber band breaks. Mistake Number 1. She quickly puts everything back. Mistake Number 2. She goes online to do some research. Mistake Number 3.

Her husband went on long business trips, spent nights away from home and often had blood stains on his clothes. He got fired from his teaching job for molesting children and police continually brought him in for questioning regarding murders. Yet Fayina Chikatilo never had a clue her husband Andrei may have raped, murdered and eaten over 100 people. They were married for nearly 30 years.

With their daughter’s wedding coming up and the shame their children would face with a serial killer as a father – not to mention she would have to get a divorce, become the community’s pariah and sell the house – Darcy makes Bob promise not to kill any more women.

Seemingly, their life goes back to normal.

A GOOD MARRIAGE is terrific. Directed by Peter Askin, it is widly tense and at times funny. The real bravo performance goes to Allen, who shows the collapse of Darcy’s emotional state. It is a wonderful loony – and unusual – role for Allen. We are used to seeing Allen as the CIA’s Pam Landy and this season as the hard-edged, bitch colonel in THE KILLING.
My favorite serial killer family story does not involve a wife but Jeffrey Dahmer’s parents, Joyce and Lionel. When Jeffrey was 18 years old, they divorced. One day Jeffrey came home to a cleared-out, empty house. Lionel moved to a motel. Joyce and Jeffrey’s younger brother had vanished. They slipped away not telling him they were leaving. Jeffrey didn’t even know how to contact his mother and brother. Why? Was Joyce afraid of Jeffrey? A few weeks later Jeffrey had his first kill. I opine that both Joyce and Lionel knew full well how dangerous Jeffrey was.