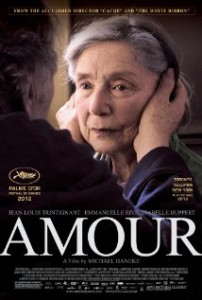 Two-time Palme d’Or winning Austrian director Michael Haneke’s French language film is a remarkable work of art about intertwined married lives.  Georges (John-Louis Trintignant) and Anne (Emmanuelle Riva) are retired, octogenarian music teachers living in a Parisian apartment which has seen better days. They seem to be having a pleasant retirement until one morning when Anne becomes mute from what later is diagnosed as a transient stroke. She soon suffers several more strokes and loses much of her power of speech and movement. The increasing demands of daily care become more onerous. and nurses are hired to allow Anne to avoid returning to the dreaded hospital   She is confined to a motorized wheelchair and a hospital style bed.

Ms.Riva, who made her film debut 53 years ago in Alain Resnais’ “Hiroshima Mon Amour”, delivers a virtuoso performance of decay and decline as she loses her dignity and ultimately her identity.

Mr. Trintignant, a world-wide star of the 1960s and 1970s of such classics as Claude Lelouch’s “A Man and a Woman” is depicted as a devoted and loving husband but also as a monster. There is a startling moment when he bares his teeth and slaps Anne across the face at their predicament. For he too is dying, trapped, like the pigeon that wanders into their apartment towards the end of the 127 minute film.

But there are also many tender moments like when Anne revisits her past looking through a photo album and displays pleasure as she says: “It’s a beautiful life”; and visits from their wonderful daughter (Isabelle Huppert) or from a  former student who has now become a sensation in the concert world.

Mr. Haneke’s film is lensed with great care by the talented Darius Khondji and has received world-wide acclaim.  It is the odds-on favorite to win the Academy Award for “Best Foreign Language Film” as it is one of the most poignant narrative works ever made that confronts the topic of death so closely and lovingly.