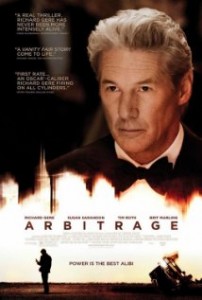 Director/writer Nicholas Jarecki (“The Outsider”-a Showtime Documentary) makes an auspicious narrative feature debut with this taut and alluring suspense thriller about intrigue, loyalty and high finance. Richard Gere stars as Robert Miller, an adulterous silver fox, hedge fund mogul whose privileged life comes crashing down because of a series of bad decisions. On the eve of his 60th birthday, Miller tries to desperately sell a Russian mine to cover up his fraudulent activities while at the same time run from a disastrous accident he caused on a country road. We are caught up in a dilemma of wanting to see Miller pay his debt to society for his wrongful actions, and, at the same time, get away with it all. All of this clever writing and plotting by Jarecki owes tribute to Alfred Hitchcock mixed with last year’s “Margin Call”.

One must single out Gere’s performance as spectacular while at the same time acknowledging a powerful supporting cast. Susan Sarandon is Robert’s long tortured wife; Brit Marling is his daughter and CFO and Tim Roth is the police detective who has it all figured out. Also one would be remiss if not to mention Nate Parker as Jimmy, a young Harlem kid with a mysterious link to Robert. A scene that takes place in restaurant featuring Gere and Vanity Fair’s Graydon Cater is stunning and unforgettable.

Borrowing copiously from the Madoff case, this film makes a compelling argument for the destructive power of money. It also is structured so meticulously that one must recognize and welcome Jarecki as a formidable new force in Hollywood feature film-making.