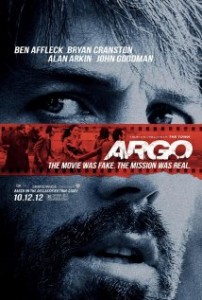 Director-actor Ben Affleck (“Gone Baby Gone”, “The Town”) creates a multi-layered political thriller that quite frankly is one of the year’s best pictures. The film tells the story of Americans entangled in a web of mortal danger during the Iranian hostage crisis that exploded in late 1979; and, a stranger-than fiction subplot assembled by the CIA to free the hostages.

The turmoil erupted when Islamist fundamentalists stormed the U.S. Embassy in Tehran and captured more than 50 Americans who were held hostage for 444 days.  Remarkably during the chaos six Americans escaped and took up shelter in the home of the Canadian ambassador Ken Taylor (Victor Garber).

Lead CIA extractor Tony Mendez(Ben Affleck)displaying Seventies style couture and hairdo recruits seasoned Hollywood professionals to concoct an escape plan that involves giving the six Americans new identities as Canadian filmmakers scouting locations for a modestly budgeted sci-fi film titled “Argo”, then get them out of Iran on a regularly scheduled commercial flight out of Tehran.

John Goodman brings his self-deprecating humor and bravado to the role of John Chambers, a Hollywood make-up artist who was one of Tony Mendez’s best friends.  Alan Arkin  portrays a fictional director named Lester Siegel who keeps us chuckling with a recurrent gag and a sense of the absurdity of this seemingly wacky plan.

What brings a sense of gravitas to this film, however, is that the factual details were declassified by President Bill Clinton in 1997 and incorporated into a screenplay by Chris Terrio based on a Wired Magazine piece by Joshua Bearman.

Photographed by the gifted DP,  Rodrigo Prieto (“Brokeback Mountain”)with Istanbul substituted for Tehran, “Argo”,  is an intricately assembled and  dynamic force which sweeps up its audience with a style and vision all its own.  It is a must see!