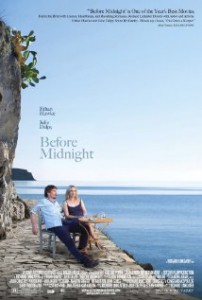 Director Richard Linklater flawlessly executes the third chapter of his “Before”movies –“Before Sunrise” (1995) and “Before Sunset” (2004) with this poetic and highly conversational romantic tryst. Refreshing your memory, Jesse (Ethan Hawke) and Celine (Julie Delpy) met on a train back in 1995, got off together in Vienna, talked throughout the evening and promised to meet again.  It took nine years (“Before Sunset”) before their next rendezvous.  Jesse has a wife and son back in the USA and turned that first “Sunrise” experience into a bestseller. He is in Paris on a book tour and Celine, an environmental activist, sets up a reunion for these thirtysomethings.   They leave us wondering what will happen next?

“Before Midnight” opens at an airport with the now divorced Jesse sending his son back to the States. He and Celine, now in their forties, are unmarried and have twin daughters. We watch them as they drive through the Greek countryside and begin a prolonged and fascinating conversation. They partake of a multigenerational dinner that presents life in totally different realm than the action, adventure illusion-ism of a studio film. After dinner they take a walk to a hotel suite for their final night in Greece. They discuss their children, their regrets, resentments and the trajectory of their lives. They end in an argument that leaves us recognizing how difficult it is for a relationship to be successful.

This is a verite style piece that has a free and relaxed visual style that allows the audience to be “flies on the wall” as the heartfelt feelings unspool and human failings become evident.  It is a remarkable example of virtuosity, tour de force acting and directing, and, an enchanting entertainment that adults can enjoy. It was one of the best films (in the Premiere category-not in competition) at Sundance 2013 and an “end of year” awards caliber film you should not miss.