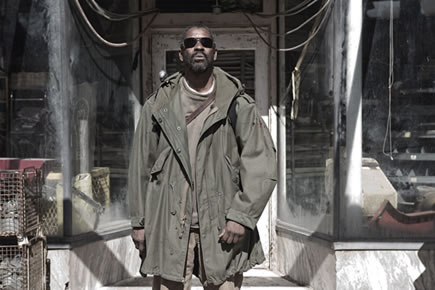 Biblical Armageddon is the theme of the first new feature in nine years from the directing team that calls itself the Hughes Brothers. Once again we are thrown into a post apocalyptic nightmare much like we recently witnessed in “The Road” or even “Mad Max”. This time, however, the object that fuels our odyssey is the last remaining King James Version of the Holy Bible.

Our lead character, Eli, played with characteristic gravitas and authority by the remarkable Denzel Washington, is to deliver a book – the good book, as it were, the only surviving Bible 30 years after the nuclear holocaust – to some unspecified place in the West. His central nemesis, attempting to thwart his mission, is a man named Carnegie played by Gary Oldman much in the vein of the Heath Ledger- style Joker. The film sets these two men against each other in epic action- infused battles that use scimitars, guns, bow and arrow and all sorts of automatic military style weapons and grenades, all in attempts to secure that Bible! The problem with the film is gamer- journalist Gary Whitta’s script which has significant gaps of logic and stays so existential in tone as to diminish emotional impact. The female character known as Solara is portrayed effectively by Mila Kunis as Eli’s acquired sidekick. Unfortunately, the battle of evil versus good seems to come up short and doesn’t provide a memorable experience. Lensed in New Mexico, with the Red digital camera, the look and the electronic score are both to be commended.