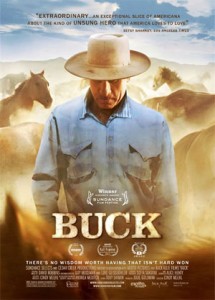 This is an astonishing documentary. Yes, it’s about one of the primary individuals who inspired the character of Tom Booker in Nicholas Evans novel, The Horse Whisperer, the movie based on the book starring Robert Redford, and spawning a TV series drama (The Ghost Whisperer) and a reality show (The Dog Whisperer). I admit being a fan of Cesar Millan and I don’t even have a dog. I know the rules of how to train a well-behaved dog – Discipline, Exercise, then Affection.

Buck Brannaman has carved out a highly specialized niche for himself among very wealthy people who have horse farms and own show horses. He travels around the country teaching four day workshops on colt starting, Foundation Horsemanship, Horsemanship 1 and Horsemanship 2.

There is a lot of archival footage – Brannaman was a child star who started performing rope tricks at age 3! Buck, and his older brother Bill, were trick rope performers. Acknowledged fact is that their widowed father Ace was a brutal, cruel child abuser. Buck still has the physical scars of his father’s whippings.

“… my dad gave us the choice of practicing roping tricks or getting whipped.”

Buck and his brother were eventually taken away Ace and placed in a foster home and raised by kind people who sheltered two dozen other kids. But, the wounds of the beatings and the trauma survived.

A longtime friend said that Buck had a hard time looking at people when he talked to them.

Amazingly, Buck transferred the horror of his upbringing to a unique relationship with a non-human species – horses. For those of us not initiated, the brutal way that was used to “break” horses and teach them to do tricks or special gaits is shown in old footage. It’s horrible to watch how horses were cruelly trained by tying their left leg and pulling it into the desired position. Buck uses another method and it appears to be gentle, highly effective, and fast. And just like Cesar keeps saying regarding re-training dog owners instead of rehabilitating dogs, Buck is “helping horses with people problems.”

Buck travels across the U.S. 40 weeks a year giving workshops. Whatever psychic wounds he has, Buck has overcome them. He has a loving wife, Mary, who accepts him and a daughter who is following in his footsteps.

As should be, director Cindy Meehl adores her subject. And she is lucky to be present when a ranch hand is brutally kicked by a horse. I actually shouted out loud.

But what is so compelling is not the feel-good story, it is the astonishing Buck. He comes across as no actor ever has. There is a wounded presence that has not been portrayed on screen. He’s riveting and this is not a sentimental portrayal or an inspirational tale. Buck is not a wounded figure. A genuine sorrow comes through but there is no need for sympathy.

We meet his foster mother, but not his brother. What happened to Bill? I’m worried about Bill. http://brannaman.com/index.html