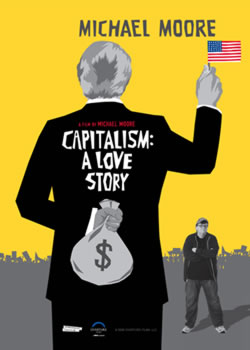 Like him or not, Michael Moore is the most famous documentarist on the American scene. Starting twenty years ago with “Roger & Me” (1989) he realized that the way documentaries can reach large audiences is for them to have a dramatic narrative driven by clearly defined characters. Instead of filming academic experts pontificating in front of book shelves, he sought out extreme situations and sinister individuals. In addition, he would not have garnered so much attention for his films had he not made himself his protagonist. In sneakers, baseball cap, thick glasses and a morbidly obese body he becomes the stereotypical Midwesterner with a personal quest for truth and fairness and an irreverent sense of humor and a dogged refusal to take no for an answer.

His latest film is a scathing attack on the capitalist system that is often funny as well as scornful, rambling, provocative, persuasive, poignant and powerful. His rage against the inequities created by corporations feeds off our recent financial turmoil, government bailouts and growing unemployment. Moore expands his story of financial collapse into an epic of malfeasance and crimes committed on an international scale. It is his most comprehensive work to date. Sure it contains the requisite ambushes and absurd confrontations we expect in a Michael Moore signature documentary such as his arriving at the headquarters of Goldman Sachs in a Brinks armored truck. With a bull-horn in hand, he tells security “We’re here to get the money back for the American people”. Michael Moore concludes one of his best films to date with a call for community activism and labor-union muscle. Another entertaining and proselytizing work from our greatest agitprop indie filmmaker.