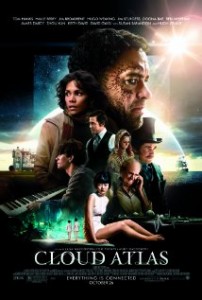 Director-writers the Wachowski siblings (the Matrix), Andy and Lana (formally Larry before assuming female gender) have teamed up with Tom (Run Lola Run) Tykwer (who also wrote the music) to adapt the seemingly unfilmable, celebrated 2004 novel by David Mitchell titled Cloud Atlas. The film, which has a running time of two-hours and fifty-two minutes takes six interlocking novellas from the book and weaves these into story lines that have six separate time frames.

There are the stories of a 19th century American notary traveling home by sea from Australia; a youthful gay British composer who is an amanuensis to a geriatric musician in 1930s Flanders,  Belgium; a reform- minded journalist trying to break a story about a corrupt energy corporation in 1970s Los Angeles, a shoddy book publisher residing in a rest home in contemporary London; a genetically cloned Korean restaurant sous chef working in 2144; and a Polynesian tribesman living in a post apocalyptic future version of Hawaii who speaks in pidgin English.

The film which is impeccably photographed by John Toll and Frank Griebe has high production values and tells us that everything is connected-our lives, our loves and our fates. We sense a cosmic reincarnation and a sense of visionary mind-bending.

Except for the tribesman’s story which is centered like a hub, the other narratives loop back on themselves so the film becomes a palindrome of sorts.  This sense of confusion will tax even the most committed of film viewers as the film defies dramatic convention. It challenges you to stay emotionally connected

Cloud Atlas which reportedly cost $100 million dollars to make was funded by wealthy Asian investors. It is a triumph of the art film genre in the “Tree of Life” tradition. It is replete with glorious fragments which will satisfy your craving for spectacular settings and visionary design.