I didn’t care about any of the characters, especially happy-go-lucky Patient Zero. 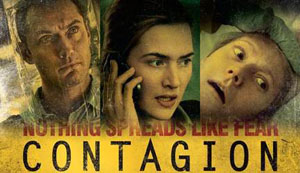 A plague epidemic – The Black Death – swept through Europe from 1348 through 1351, killing an estimated 25–60% of Europeans. Some estimates are as high as 2/3rds of the population. I read Plagues and People by William Hardy McNeill and The Black Death by Robert S. Gottfried. My ancestors and yours survived. Our immune systems are strong. 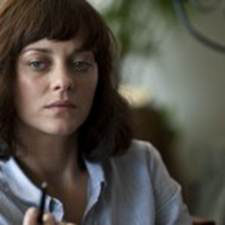 I travel all over the world, preferring “Third World” countries. After watching CONTAGION, I realized how incredibly naïve I am to the threat of infectious diseases. Last month I ingested two strange, secret substances in rural Cuitiba, Brazil. Who made the visionary brews? What the hell was in the stuff I snorted through my nose, drank, and smoked in the hut in the forest? What was I thinking?

What about my yearly jaunt through the Amazonian Rain Forest? I don’t even bring handiwipes.

Did I even bother washing my hands as I traveled through Ethiopia last year? What about all those children who wanted to touch a white-skinned foreigner?

There is no way to avoid other people, especially when traveling. The long lines and crowded conditions put people together who would not – in past centuries – ever have come in contact with each other. How an epidemic like the one described in CONTAGION has not happened yet is very strange indeed. Over 1 billion passengers travel by air annually; 50 million of these travel to the developing world.

With layovers, delays, and hours spent at airports, we traveled 26 hours to get home from Brazil. That is a lot of hours sitting next to strangers.

So, it is a business traveler, Beth Emhoff (Gwyneth Paltrow), who is Patient Zero. By Day 2, she is infected and sticking her hand into a plate of nuts at an airport bar. Who hasn’t done that? 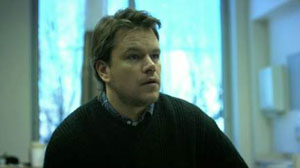 Blissfully unaware, Mitch’s marriage was not the happy union. Beth stopped off in Chicago to see a lover. He cries over Beth, but doesn’t miss the kid so much.

We are told hospitals breed infections. Airports and airplanes are cesspool breeding grounds. Why isn’t walking barefoot through security a health risk?

An epidemic is a world problem. Dr. Leonora Orantes (Marion Cotillard) is at the World Health Organization in Geneva, while Dr. Erin Mears (Kate Winslet) is an epidemic specialist in the field, and her colleague and mentor, Dr. Ellis Cheever (Laurence Fishburne), is running the operation for a U.S. agency. Dr. Mears is the Saint Damien the Leper of CONTAGION.

And then there is the Florence Nightingale of CONTAGION, Dr. Ally Hextall (Jennifer Ehle) is looking to isolate the virus and find a cure. She wears a beatific face. 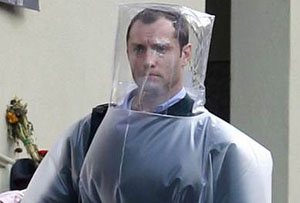 It is blogger Alan Krumwiede (Jude Law, with distracting bad teeth as a prop), who thinks there is a conspiracy involving pharmaceutical companies. A vaccine for 6 billion people will be a boon to business. Krumwiede advocates a cure that he says is being kept from the public. He starts riots all over the U.S.

The power of the Internet might be a factor, but it is boring cinema.

I’ve learned one thing about a worldwide epidemic from CONTAGION – once garbage collection stops, civilization collapses. All Hell breaks loose as soon as the sanitation trucks stop picking up the garbage. And as usual in all disaster movies, people do the only sensible thing – they crash their cars and abandon them on the street. They raid Costco.

And when a vaccine is hinted at, ordinary people go crazy while those who have first dibs on it – the researchers – gladly give away their treasured doses.

While the Spanish influenza outbreak of 1918 resulted in the deaths of between 50-100 million lives, the big SARS epidemic was a bust – numbers wise. 8,000 people were infected and 800 died of the disease. SARS killed no people in the United States. Only 8 lab confirmed cases of SARS have been reported in America, none of which resulted in death.

Director Steven Soderbergh is one of those directors infatuated with large, international casts. Drama takes a big seat to a stomping soundtrack. The beginning of CONTAGION is zippy, but it lags once the characters are introduced and left to fend for themselves.

Written by Scott Z. Burns, I didn’t care about any of the characters, especially happy-go-lucky Patient Zero. And what motivates Dr. Ellis’s kindness towards the janitor’s son? I didn’t buy it.

With the AIDS scare and fear of blood erased by sexy vampires, what is left to fear but coughing and spitting strangers?