…and Indians, peyote, a kid, a girl, and the dazzling masculine energy of Daniel Craig. Highly original and takes this summer’s pride of place. 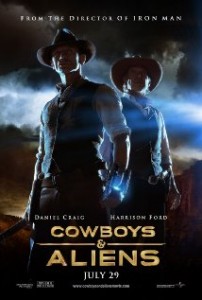 Full disclosure: one of the producers of the movie, Scott Mitchell Rosenberg, the Chairman and Chief Executive Officer of Platinum Studios, an entertainment company that controls the world’s largest independent library of comic book characters and adapts them for film, television and all other media – and creative force behind the COWBOYS AND ALIENS graphic novel* – is a personal friend. Obviously, I have few – actually no friends or champions – in the “industry”. Pam and Scott Mitchell Rosenberg are personal friends.

That is some impressive writing staff. So I wonder: Who wrote the best line of the movie delivered by Harrison Ford?

Outlaw Jake Lonergan (Craig) wakes up in the New Mexico desert not knowing his name or how he got there. He has a machine-like bracelet attached to his wrist and a nasty side wound.

Unbeknownst to Longergan, who is suffering from amnesia, he is a wanted man in the backwater town of Absolution, run by mean-spirited cattle king Woodrow Dolarhyde (Harrison Ford), who has an unreasonable affection for his nasty, no-good son, Percy (Paul Dano). Lonergan and his outlaw gang stole gold from Dolarhyde and he wants it back – or revenge.

Percy is harassing the good folk of Absolution and provokes Lonergan, who summarily shows off his fighting skills. Their mano-a-mano is interrupted by a shocking alien invasion. People are scooped up by flying alien machines while destroying the town. Percy goes up into the ship and only his father wants him back. The only thing to do is gather up the town’s men, a dog, an orphan, and a fashion model, Ella Swenson (the beautiful, but expressionless out-of-place Olivia Wilde), and follow the machines into the desert.

With handguns and a few rifles, they entertain combat with big alien bugs. Ella, a military strategist-without-credentials, has a plan of action.

Lonergan has a hat and photo of a woman that leads him to an Indian tribe. He’s not interested in Ella, but she relentlessly keeps pursuing him. The Indians give Lonergan a drink and he has a vision of what happened to him aboard the alien’s mothership. It’s not pretty. Days before the screening, I was in the Peruvian jungle, continuing decades-long twice-yearly work with the visionary plant medicine ayahuasca. I don’t know which medicine tastes more horrible – Lonergan’s peyote or the Iquitos curandero’s ayahuasca.

According to History Channel’s “Ancient Aliens” series and my dear friend Jacques Vallee’s book (written with Chris Aubeck) “Wonders in the Sky: Unexplained Aerial Objects from Antiquity to Modern Times and Their Impact on Human Culture, History, and Beliefs” there is absolutely no reason why aliens would not be in the Old West abducting people and mining our resources – especially since, coincidentally, New Mexico is the home of the Los Alamos National Laboratory and the famous E.T. crash site Roswell.**

Leaving Absolution and finding the alien base, the story moves to the fierce, CGI-hogging battle between the cowboys and aliens. Lonergan and Ella team up. Ella ignores Lonergan’s love for his missing wife and kisses him. She pays for this indiscretion yet saves the world.

Ford has become a caricature and has given up acting.

Thanks to COWBOYS AND ALIENS, everybody is going to want a cowboy hat.

**329 BC: Central Asia. Alexander the Great records two great silver shields, spitting fire around the rims in the sky that dived repeatedly at his army as they were attempting a river crossing. The action so panicked his elephants, horses, and men they had to abandon the river crossing until the following day.