The story twists beautifully and shockingly. The ending is brilliant. Skillfully directed by Jordan Scott. 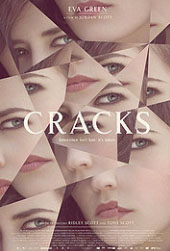 I read the novel “Cracks” by Sheila Kohler and was thrilled to read that my significant, only girl crush, Eva Green, would star in the film adaptation as Miss G.

Eva Green is the only woman who can rival Angelina Jolie. And, by the way, she’s French and a much better actress. (Green played the most intelligent Bond Girl, Vesper Lynd, in CASINO ROYALE, played Morgan in the Starz TV series CAMELOT* and will be seen in 2012 in DARK SHADOWS with Johnny Depp.)

The CRACKS screenplay, by Caroline Court, Ben Ip and Jordan Scott, changes the era and location of the novel, but I am not here to review for book, which was very seductive.

CRACKS takes place in 1934 at the all-girl’s boarding school, St. Mathilda’s, situated on Stanley Island, off the coast of England. It reminded me of Norway’s Utoeya, where Anders Behring Breivik massacred 69 people at a youth camp this past July. I was in South America, and it was the only story CCN carried. 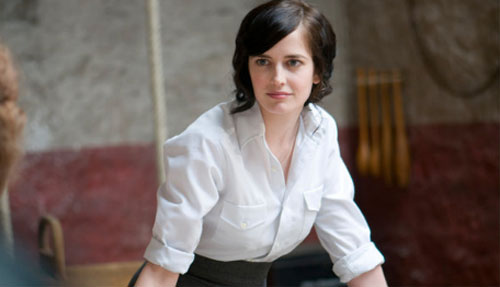 St. Mathilda’s isolated, dreary, and run by old women steeped in tradition and one astonishingly beautiful teacher, Miss G (Eva Green). Miss G is stylish, worldly, fiercely passionate (Miss G’s motto is: “The most important thing in life is desire.”), and probably a lesbian. Why else would she abandon herself to St. Mathilda’s coaching the school’s elite diving team?

The girls have been left to rot on the island abandoned by their parents. The diving team is headed by Di Radfield (Juno Temple), the alpha-female team’s captain. She is the best diver, demands obedience and servitude by the other girl’s, and revels in her position as Miss G’s favorite.

Until a new girl arrives on the island. Fiamma (María Valverde), is a Spanish aristocrat, who immediately hates the school and refuses to have anything to do with the other girls. Rooming with the diving team, she stays by herself. Di is threatened by Fiamma, who mocks her for being a “princess” and the school’s trophy student.

Things get worse for Fiamma when she proves to be an excellent diver and Miss G’s newest obsession. She is also a mysterious, unhappy beautiful girl.

Di’s position is rightly threatened by Fiamma, who is totally uninterested in the clan mentality of the diving team, having resigned their fate to be marooned on the island. She just wants to go home. Di’s jealousy takes over when she spies on Miss G in the throes of passion with a passed-out Fiamma. The next day Fiamma wants to report Miss G’s indiscretion. Miss G will be fired and her reputation ruined. Di wants to get rid of Fiamma and enlists the team to beat her up.

The story twists beautifully and shockingly. The ending is brilliant.

Directed with a strong hand by Jordan Scott, Ridley Scott’s daughter, the change in era from the novel’s 1960s, gives the film a more dramatic setting. The change also makes the sexual theme of the film more intense. It gives Miss G an elegant and seductive wardrobe. Green, Temple and Valverde are perfectly cast. Temple’s frizzy hair and pug-like face easily telegraphs her insecurity and jealousy.

* There will be no Season Two of CAMELOT, the King Arthur legend. That means no Lancelot! The series starred ill-cast Jamie Campbell Bower as a young King Arthur, with Joseph Fiennes as Merlin, Eva Green as villainess witch Morgan, and Tamsin Egerton as blond temptress Guinevere (with 1960’s Farrah Fawcett hair). Head writer Chris Chibnal and the producers re-imagined Merlin, the legendary wizard, as a sexy, lustful Machiavellian king-maker tortured by his magical powers. However, according to folklore Merlin was a bard driven mad after witnessing the horrors of war, who fled civilization to become a wild man of the wood in the 6th century.