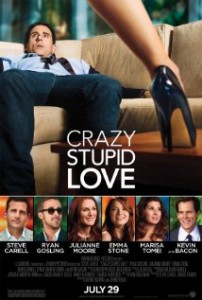 Directors Glenn Ficarra and John Requa ( the under appreciated “I Love You Phillip Morris”) working from a clever, solid  romantic comedy(rom-com) script by Dan Fogelman (a Disney/ Pixar vet whose credits include “Tangled”  and “Car”) have made a sharply funny and deeply amusing  mainstream movie for adults. In an era of Apatow infused R-rated comedy, this film is a multi-generational love story which feels both fresh and unique. It begins and ends with intertwined lives that revolve around the vulnerable Cal Weaver (Steve Carel), who has a midlife crisis when he finds out his wife of 25 years, Emily,  ( the remarkably reliable,  Julianne Moore) has been having an affair with co-worker David Lindhagen (Kevin Bacon) and plans to divorce him.  Ryan Gosling nearly steals the show with some amazing comic chops as he glibly delivers witty repartee as Jacob Palmer, a smooth operator who decides that Cal needs his help to pick-up women.  Carel does an excellent job of making Cal’s changeover from nerd to “chick magnet” real for the audience. The film also is about Robbie (Jonah Bobo), the 13year old son of Cal and Emily who has an intense infatuation with the family babysitter (Analeigh Tipton). The zinger- studded script intensifies after Cal’s one night stand with Kate (Maris Tomei) who turns out to be Robbie’s 8th grade English teacher.  The piece that bears the most emotional poignancy is the relationship that develops between law school graduate, Hannah (Emma Stone) and Jacob who falls in love with her. It all comes together in a climax which is both bizarre and chaotic. This wonderful film, however, has its missteps.  The ridiculous 8th grade graduation scene is unreal and makes for uncomfortable viewing. But, this is a film which deserves your attention and succeeds most of the time in both entertaining and enlightening.  See it!