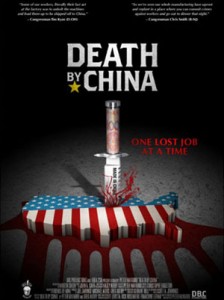 Death By China is a powerful documentary about how China’s government is destroying American manufacturing companies and costing Americans their jobs. This 80 minute documentary (narrated by Martin Sheen) is the best one I’ve seen about this urgent problem because it explains cogently how the Communist Party of China is hurting the United States economy today by: (1) stealing American intellectual property, (2) manipulating currency, (3) making WTO violations, (4) shipping poisoned products to the U.S.A. like lead paint on kids’ toys, (5) Sending us poison products like pet food, and corrosive toothpaste, unsafe tires, medications like erroneously designed blood thinner (Heparin), contaminated fish, unsafe pork, toxic apples, poorly built cribs, and the list goes on and on. The film is about China’s governmental attack on US factories and its jobs, while it insidiously floods the U.S. market with deleterious products.

It’s a well polished film. Excellent sound design, graphics, editing, all production values across the board are spot on. Director, Peter Navarro, has done a brilliant job of making this documentary compelling and engaging.

In 2001, China joined The World Trade Organization compliments of Bill Clinton. The Free Trade Agreement signed by the CCP (Chinese Communist Party) promised to stop cheating and play by fair trade rules such as ending currency manipulation, ceasing illegal export subsidies, and abrogating the abuse of its workers. But by employing forced labor, The CCP doesn’t comply with its own child labor laws, prison labor laws, health and safety laws, and minimum wage laws. In addition, this doc describes The Chinese Gov’t‘s implementation of censorship called The Great Firewall. While in China if you’re on-line you can’t open websites like humanrights.org, can’t look-up the word, Dalai Lama, Falun Gong, Democracy, amnestyinternational.org, Darfur, Tibet, etc. China is less free today, then when it joined the WTO. Today’s CCP has 50,000 internet police making sure that the people don’t have access to democratic ideas.

Death by China also discusses China’s environmental problems. Sixteen of the world’s 20 dirtiest cities are in China. China has the world’s most degraded environment, the greatest amount of heavy metals pollution, worst air pollution, and water pollution. China’s got it all. California even gets 25% of its emissions pollution from China as poisonous air crosses over the Pacific Ocean via the jet stream.

But, don’t blame the Communist Party. You got to place the blame where it belongs, on the U.S. multi-national corporations that do business with China. Now we owe more than 3 trillion dollars to the world’s largest totalitarian Nation.

What is needed is to balance our trade deficit with China. The film explains how to do it through trade reform practices. I hope that Mr. Navarro does a sequel that covers the issues he didn’t discuss in this documentary such as territorial disputes, PLAC (Political Legislative Affairs Committee) and CPD (Central Propaganda Department) which both need to be dismantled.

The film featured excellent interviews with folks like Harry Wu, Gordon Chang, and Richard Trumka President of AFL-CIO who pointed out that “5.5 million American manufacturing jobs are gone”, 57,000 American factories have closed and U.S/ American debt to China is over $3 Trillion.

Death by China is mandatory viewing for all individuals who wish to understand the dilemma faced by the United States as it comes to grip with 21st Century China-the 800 pound gorilla of the world economy.